This page is now complete. 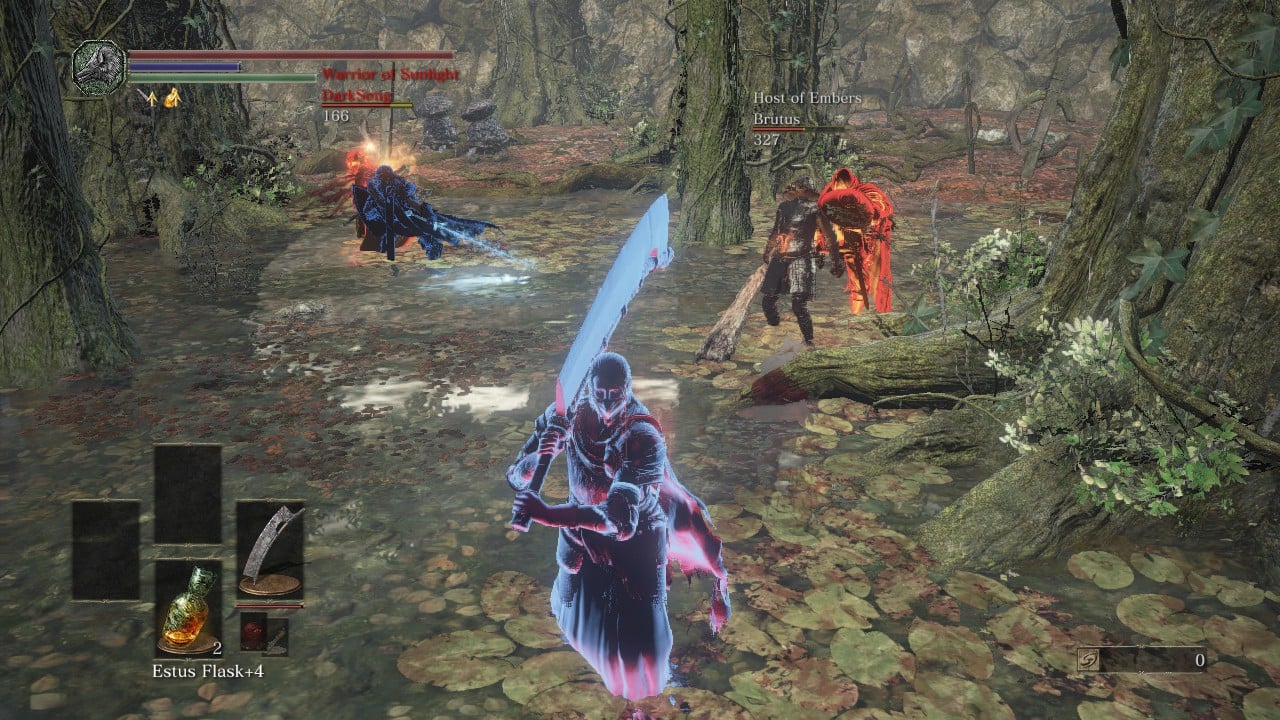 The items that you will want regardless of your approach are:

remember, Main Stat: Meet min reqs for weapon, then 20-22 into HP and rest into endurance

1. You need to use the knights ring the lower reqs on you 2h weapon by 7. That means the knight ring gives you 7 endurance, making it by far the best early game ring. 22 str is all you need with knights to 2h 40 str weapons.

4. You need 23-28 poise AND 70% dodge roll. 23 poise is ideal, 28 is ideal if they are using an UGS. So after the ROF+3 and prisoners chain, you will use havels and the wolf ring +3 to reach 23 poise. Our weapons usually have hyperarmor, so the large poise is to reduce the amount of stun attacks the enemy gets in. That's why poise is more useful than armor. If you are up against an UGS, you can quickly get 28 armor, but this build should already be deleting UGS users, since your DSGA +2 weapon art has infinite poise.

5. Fashion souls. The above things, endurance, dodge roll, poise and hp are your beef (also your weapon). You can run havels +3 over the ROTS +3 or wolf ring if you really want, assuming you meet the requirements listed above.

6. Armor. You don't need elemental armor early game, just phys. If you don't need both havels and wolf3 to reach 23 poise, then you get the ROSP+3. It has reduced armor, but is otherwise a very good option.

7. If you somehow can skip both the wolf ring and havels AND the knights ring, while still getting the three other core rings, then you use the estus ring to buff your estus

8. Having 70% dodge roll means you NEVER take damage unless you are trading EVER. The only time you'd want to trade with low endurance is when its advantageuos to you, and we have plenty of advantages already. This is why we don't run the chloranthy ring: you can just kite till full endurance.

There are several approaches you can take to pvping in this area. For starters, let's explain matchmaking. At lvl 40 and +2 boss/+4 normal, you can invade players with +2 weapons down to level 36. You can be invaded by players as low as level 32. You have multiple options for pvp. You can invade with the red eye orb from the crucifix woods, cathedral, farrons keep, and the catacombs and a little irithyl. In addition, people anchored to you via being your summon will be able to pvp in your level range, regardless of their build if you use a password. I call this an anchor build, and with 2-3 users and a dried finger you should be soaking up a solid number of invasion in the cathdral/farrons, and the occasional invasion in the crucifix woods too.

As for weapons, you have options. This build does not consider straight swords, the bandits axe, longswords, or the broadsword since they are boring. Bleed builds are not very strong at this level, nor are condition builds in general. Endgame dmg style builds are objectivally bad at this level for many reasons, including +2 scaling and limited health/endurance. You can rush several pyromancies, since their damage is okay and their hitboxes are not dodged very well. This build doesn't focus on that.

Many other close options, such as the dragons tooth or quake hammer, are more endgame in their scaling and not as ideal as these weapons early game. This is low level pvp, so you want as much base damage as possible. The only heavy weapon you should consider outside of these is gundyrs halberd, for its large poise dmg and stun profile.

Smoughs hammer takes 25 str + the knights ring to wield, deals scaling dmg, and is extremely heavy, making it the worst option here, but still one for people looking for style since it can be buffed and looks insanely scary early game. Yhorms and the DSGA take 22 str + the knights ring to wield (2 handed). Yhorms is a solid weapon, with a stomp mixup, mixup power attack, long range and great damage. It's not as good of a moveset as vordt's/DSGA and it takes tons of stamina, but it's sheer damage makes up for it. Vordt's is the second best option here, with a delayed swing that's constant hitbox makes hitting rolling enemies a breeze. It also only requires 15 str + the knights ring, meaning you can have super great stats with it. It's running attack is better than any of the other weapons. Unfortunatly it's very heavy.

The DSGA is by far the best level 40 pvp item. It deals absolutly retarded damage, has decent stamina and relativally fast attacks. The best part is that after winning trades for a bit, you can bait players into the special and delete them. The DSGA special attack is absolutly amazing at level 40 pvp, hits behind you character, has a sustained hitbox(can stun dodge rollers), and hits between 350-650(650 if they get hit by both the axe and lightning) depending on how close they are to the attack THROUGH KNIGHTS ARMOR (1k dmg without armor, a one shot). Did I mention the special has insane hyper armor? 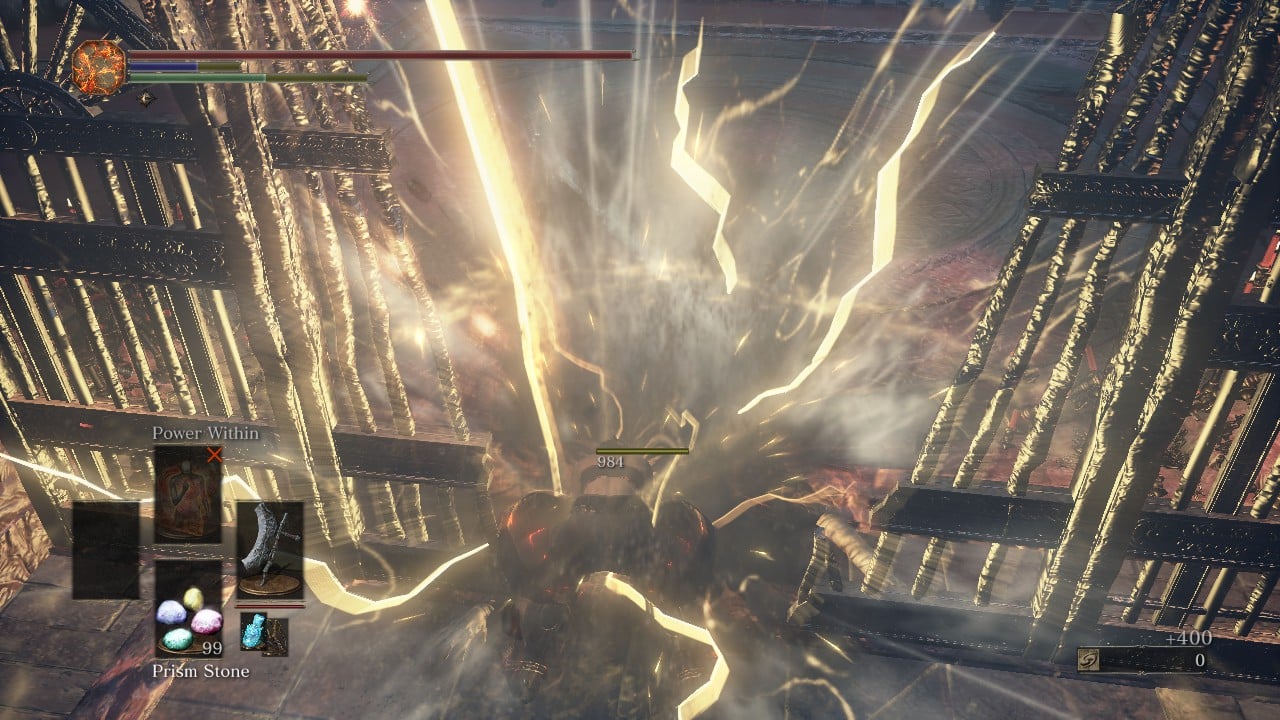 The upside on these weapons is that their small requirements allow for BIG stats, maybe skipping the knights ring, being lightweight and allowing for parrying shields. Unless you are great at parrying I HEAVILLY suggest starting with vordt's and eventually respeccing into a DSGA build, but otherwise these will do. The bastard sword is accessible early, has a nice hyper armor profile, small reqs, can stun well, and is overall flexible. Just a decent weapon. If you want a zweihander equivilant, the profanged greatsword is the best option for this level range. The hollowslayer GS is OKAY. It lacks the punch and suprise the other weapons have but has decent stats and a decent move profile.

As for stabby stabs, you just upgrade a dagger/mail breaker to +4. They provide a movement or attack mixup. They really aren't required for most str weapons unless you fight a lot of parrying enemies (you won't.) The dash however can be quite fun. Parrying varries on your stats. You just get the smallest parryer you can use with your dex, which could be the buckler, target shield or parrying dagger. It's suggested you learn to parry if you are going for these light weapons.

There's a lot of cheesing you can do. Greatshields deal a TON of poise damage and, with our endurance build, can make you nearly immortal. Just use them as both a weapon and shield, mess with your enemy. Chameleon and force both knock people off cliffs, Chaos bed vestiges requires lots of rings to dmg and is awful at duelling, but if you are planning on using the PVE instead of just duelling 1v2 (the fair way to fight noobs), then this spell can be amped up and hits hard.

Also, you can buy like a billion prism stones, and make weenies if you are hosting a fight club. They are DIRT CHEAP, and since you can't level up past 40, you should have a bazzilion homeward bones and duel charms too.

Scrub weapons are just boring. The others have tempting lures, but very bad stat requirements and output compared to our other listed options at lvl 40. Bleed poison weapons require too much hit confirm for too little damage early. Glaives in general are also all EH at level 40 pvp. They are scaled for 70-120, and all they are OKAY at is range, light hyperarmor and lightweight. Gundyr's is the only glaive option, and only because of its stun of 28.

Actually a pretty small zone, minimal bs, open areas. Best area to invite your friends, chill out in the open and kill any invaders that don't run like hell. In addition, tons of noob invaders here makes for hilarious one shots, parry's, and other deleions.

Cathedral of the deep:

There are four zones of PVP here. The cieling, the starting area, the roofs, and the giant.

The giant is always meh, since noobs die and good players run by. The only fun part here is that both you and your invadee can get hit.

The starting area is nice because 75% of the time, players are in the church and are willing to fight to the death. That beats a lot of other zones.

The roofs (red sign when you're just after the first warden, up the staircase), is the best place to pvp. You can duel, or if it's 1v3 with carries, delay a bit. The only problem is that you sometimes invade people using shortcuts and should just black crystal out.

Cielings: Horrible pvp in every way, if you can even find your enemies.

This area is worthless to us. We don't care about chasing our enemies, this build is only designed around killing people who are willing to fight to the death. If they run, we only chase a little and black crystal out.