Anor Londo is a Location in Dark Souls 3. The legendary city of the gods that has since been taken over by Aldrich, Devourer of Gods. Once radiant and warm with sunlight (albeit fake), it is now entirely dark and cold due to the absence of Dark Sun Gwyndolin.

Blades of the Darkmoon Covenant

To find the Blades of the Darkmoon covenant, return to the rotating platform and go down the spiral steps to the platform that appears to now lead nowhere. Step off to walk onto an invisible bridge and head right to drop off onto a tower. Light the Bonfire here and walk to the left to meet Company Captain Yorshka, leader of the Blades of the Darkmoon. If you enter this tower you can drop down the plank ledges carefully to reach a beam with the Painting Guardian's Curved Sword. Drop down a few more ledges to find the Painting Guardian Set. Drop down the rest of the way to come into the bonfire room in Irithyll of the Boreal Valley. Port back to the bonfire in Anor Londo to continue your journey.

From the Bonfire, walk up the staircase towards the castle. As you ascend the stairs there are two silver knights who will attack you. Deal with them and just to the left at the top of the stairs you will find Large Soul of a Weary Warrior 1x, then head to the right where you will encounter a red eyed Silver Knight. Loot a corpse here for Soul of a Crestfallen Knight 1x. Continue left and enter the open door where the dead giant blacksmith lies and in his hand find the Giant's Coal and then continue up the stairs, into the dark main chamber. Turn right and look over the ledge and you can see the fog gate where the boss awaits.

Continue down the stairs but be wary of the pyromancers casting fireballs from the other side. Near them is a corpse with Proof of a Concord Kept 1x. Most of the old passages have been filled in with rubble. Head down into the main chamber and dispatch the deacon pyromancers and slimes. Head to the opposite staircase to loot Moonlight Arrow 5x. Continue to the corner to find the revolving switch that opens the main double doors into the castle. There is a Deep Accursed waiting for you here, be careful not to be cursed by the white fog he breathes. Defeat him to earn Aldrich's Ruby. Once the doors are opened this area can be much more easily accessed from the bonfire at the base of the castle.

Step out the now opened main doors and if you've been progressing Anri of Astora's quest line, to the left you will see a purple sign on the floor which says "Touch sign requesting cooperation". Triggering it will ask you if you will answer Anri's call for cooperation and be summoned as a phantom. If you accept, you will enter their world as a phantom to assist them with defeating Aldrich, Devourer of Gods in their world. If you are successful in defeating Aldrich you will be returned back to your world, where the purple glow will now have a golden hue. Defeating Aldrich here does not count as defeating him in your world.

Return to the main chamber and on the other side of the main hall, there is a chest (left wall if facing from the stairs) containing a Estus Shard. Continue down the hallway towards the fog gate. There are three enemies from the Deacons of the Deep boss fight standing between you and the boss room. Once they have been defeated, enter the fog gate to face Aldrich, Devourer of Gods. and earn Soul of Aldrich and Cinders of a Lord.

Once the boss has been defeated, light the Bonfire and head left to take the lift in the corner to enter Gwynevere's former chamber to pick up the Sun Princess Ring. 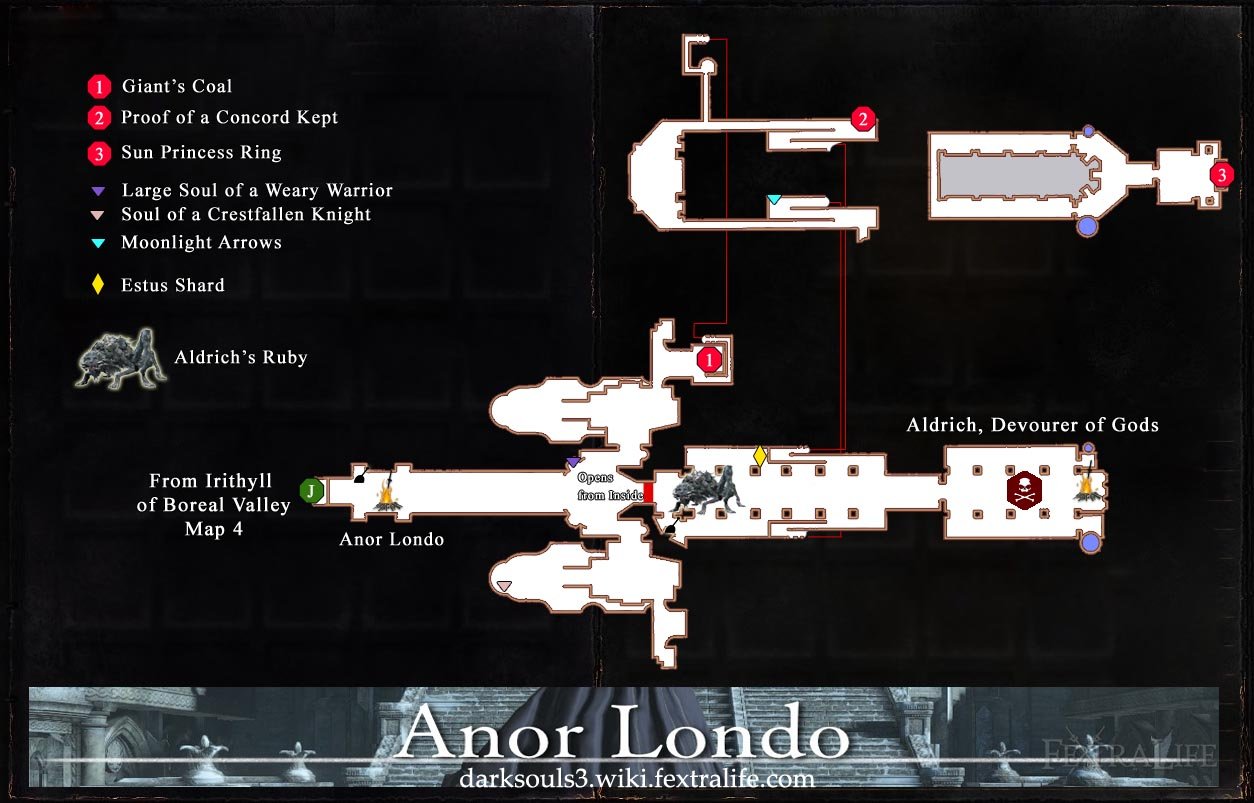 Read above to see how to open the door.
Once the door is open and you die (as mostly likely your first attempt will result in such) from the bonfire run straight up the stairs, picking either the left side or right side (straight up will result in a stab) and past the knights.  They will follow, but if you keep running you can avoid them.  Go to the right side and use the pillars as cover as you move to the final pillar and once a caster or two has shot his fire, leave cover and run up to the fog gate on the right side.  There's no need to engage a single enemy before the boss gate.