Curse-Rotted Greatwood is a Boss in Dark Souls 3. This massive tree is filled with curses, and is the object of worship for the Undead Settlement's inhabitants.

Immediately after the boss becomes active charge its left hand and left leg and destroy the egg sacks there. Back away and wait for the boss to do a kicking attack, fending off any undead as needed. As soon as you recognize that it is raising his leg to kick, charge to its groin and attack it as much as you can and then block or roll to dodge the imminent blow from its arm. Repeat until you fall into the pit.

Once in the pit, you'll want to stay away from the boss while determining where the remaining sacks are. You are entirely safe if you stay locked on and circling him, out of range. The Greatwood has a few eggs on its lower back and a few more on its right elbow; manually-aimed ranged attacks work best here, bows particularly for the targeting reticule, but you can also attack it in melee following the Cursed Wood's stand-and-fall attack, but you have to be quick; the white arm that emerges from its stomach/groin is also vulnerable. Once you've gotten rid of the groin sacks, and the lower back sacks, you may have to attack its white arm, as the remaining sacs are impractical to reach. This may require you to fight locked-off. Watch out for the arm's attacks, it has a grab that's particularly nasty. Simply dodge whenever you see it doing something, all its attacks have considerable recovery that should let you get in 1-3 blows.

The best time to do massive damage is in its second phase. Goad it into it's falling attack. Dodge and you will have a good opportunity to get some hits in on some of the sacs you couldn't easily hit before.

As soon as you see the boss stand up and lean forward, sprint to you're coming from behind it, to its left hand side. When it falls down the white arm will be vulnerable for about 5 seconds. This is a perfect time to score a combo. When you see it stand up, if you have any, use a Pine Resin and imbue your weapon with either fire or lightning and maximise the amount of damage you can get in the small window. If you've destroyed all of the sacks, this is the safest (if slowest) tactic.

The best strategy for pure magic with this boss is to spare him until you have the spell Pestilent Mist. With it, this boss gets rather easy, just get near him, cast the spell, move out of range, wait, repeat. Since the boss will only break the ground if you are near him, with Pestilent Mist it is possible to avoid stage two completely - the boss will break the ground when he dies, but not before. The only things you have to watch out for are the undead, that spawn until the boss is dead, and his ground rolling attack.

Phase two is much easier then, always keep the boss target locked and bring your self into position. The advantage of White Dragon Breath is that it follows the ground and upward, which is why you should keep the boss target locked and only cast when one of its sacks in between you and the lock. You can aim for its middle sack after the white hand swiped 3 times, sometimes even hitting the hand and the sack.

It is also possible (and not very difficult) to hit the egg sacks with unlocked spells; the large aggregation on the Greatwood's back in particular is just barely out of range of many melee weapons, but easy to hit with unlocked soul arrows.

This boss is weak to pyromancy, giving you a good advantage. As soon as the fight starts, start lobbing fire at the big egg sack on his crotch. You'll be able to quickly destroy this, progressing the fight into phase II. During the phase transition, if you're quick enough, you can destroy the egg sac on his left hand.

While in the pit, prioritize targetting the sacs on his hands, feet and back. Once the boss has low health, you can just target the white hand that has now emerged from his stomach. Be careful not to get hit by his sweeping attacks, and be prepared to evade his body splashes.

Follow the same Phase 1 strategy as the guides above, but once you get to phase two you can cheese it. If you run out of range as far as you can the Greatwood will stand up and do a belly flop a lot like the Frog Boss in DS2. While he is down you can hit the arm a couple times and run away before he can do any damage to you. Simply keep on doing this over and over again and the boss should be easy for any build. Keep in mind he does have an attack where he stands up and rolls sideways that you have to avoid; its a bit more rare and does not give you a window of opportunity to do damage, but seems to only come up after he has done half a dozen of the regular belly flops. 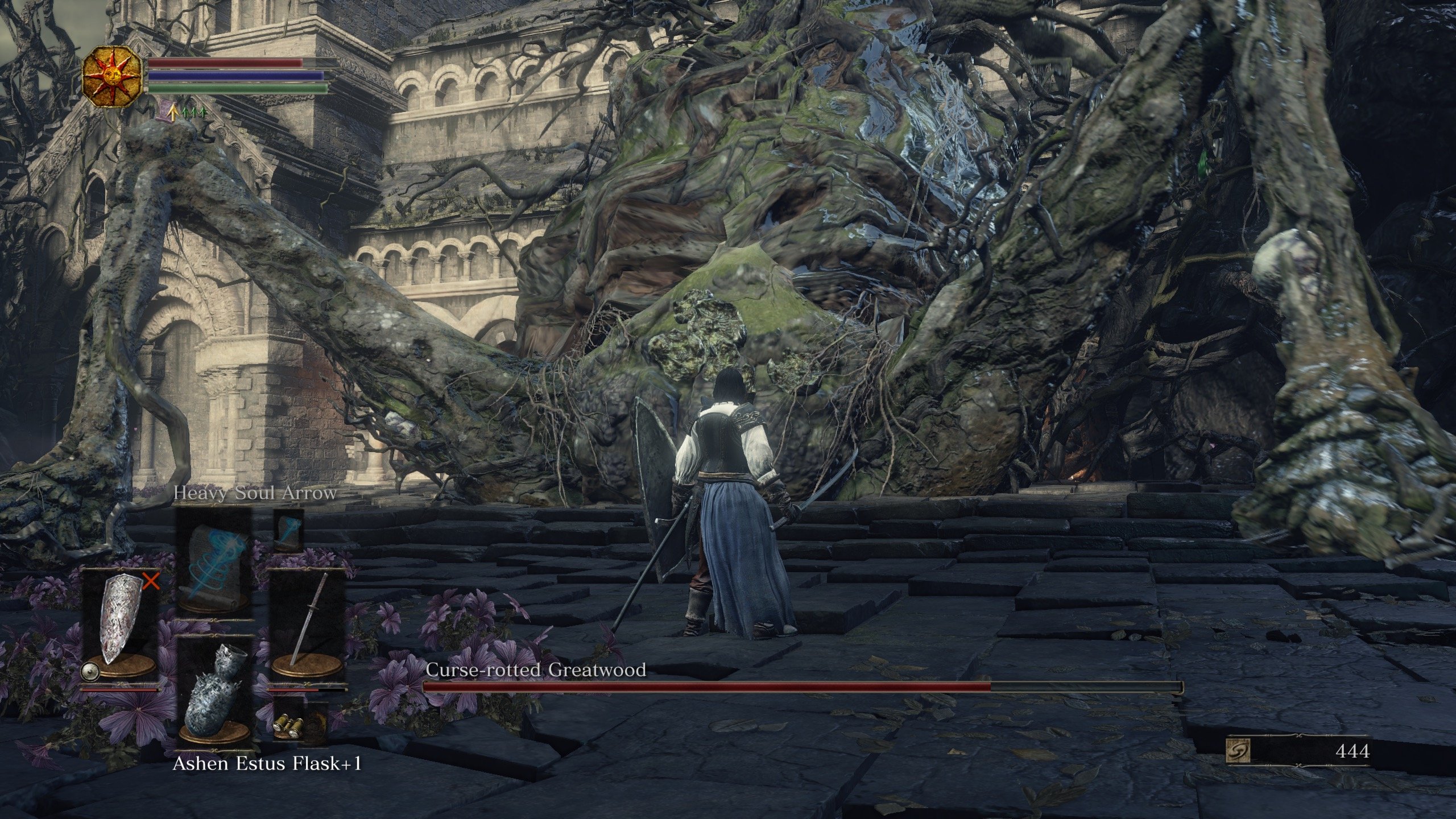 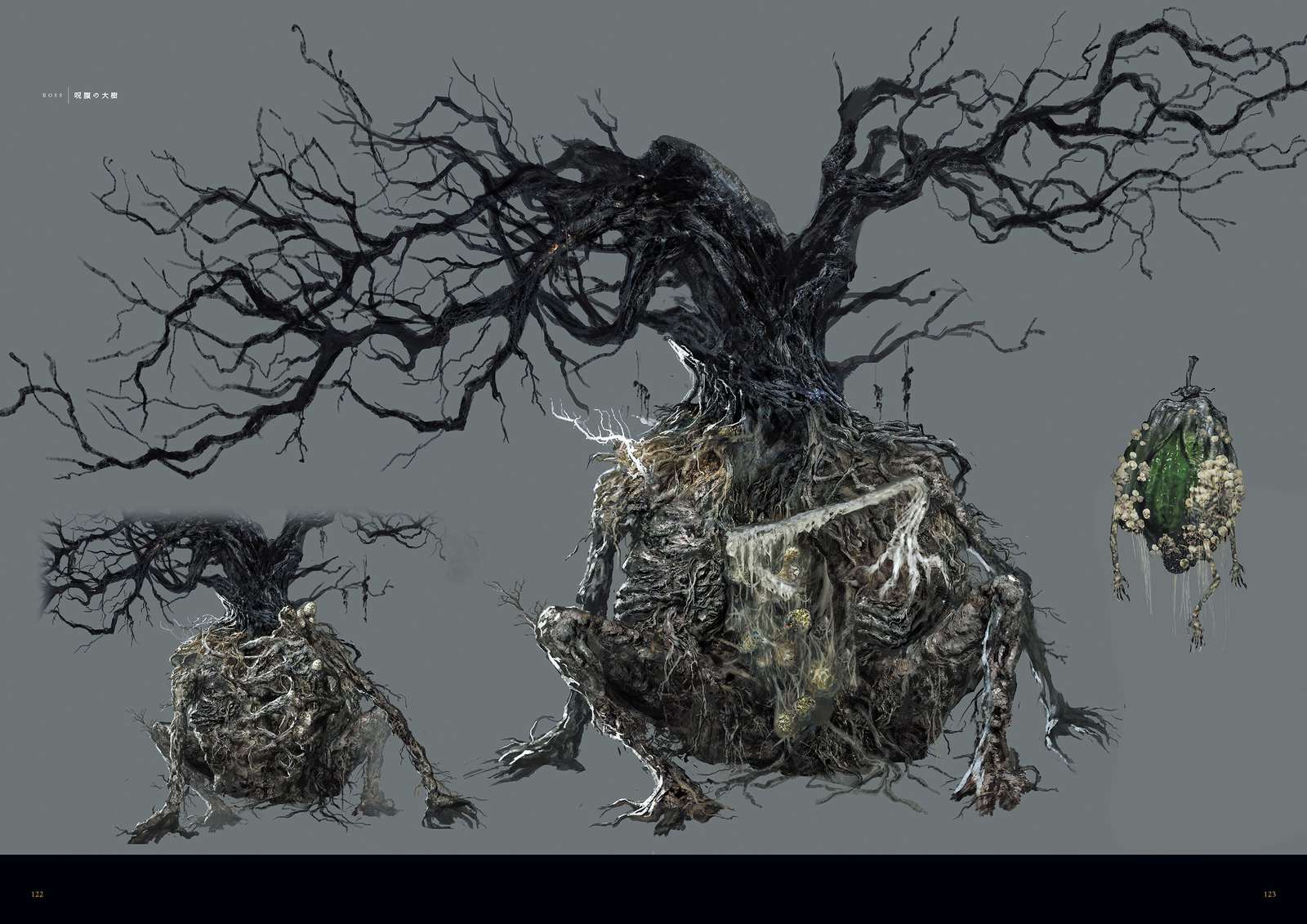