Demon Prince is a Boss in Dark Souls 3, available with the Ringed City DLC.

For this strategy, you have to play Co-op. Many say to use only one summon, but using both Amnesiac Lapp and Slave Knight Gael is an amazing combination because they heal themselves constantly, and draw aggro so the player can have huge windows to do damage. If the player is adamant about using only one, or is doing better with just one for some reason, it is better to choose Lapp as he does similar damage to Gael, but takes more damage easier than Gael does.

In this phase, while Gael or a player aggroes Demon in Pain, you will focus on Demon from Below. Now, the strategy will change depending on if the Demon from Below is or not on fire. An important note is that a good shield for this fight that resists high physical and fire can come in handy blocking their attacks.

If the demon you're facing is burning, then you'll mostly want to stay under or behind his legs, as he will have difficulties reaching you to make damages, while you'll be able to attack him all you want. Now, it might seem like a really basic advice, but don't use up all your stamina, since you'll need it if you have to dodge. Green Blossoms can help, in order to land more attacks, while still being able to dodge after.

If the demon you're facing isn't on fire, stick to his face like a bubble-gum sticks under a high schooler's desk. This way, if the demon barfs, you won't get hit nor poisoned. However, if he slowly rises on his legs while raising his arms, that means he wants to slam you, so turn around him, and dodge if necessary, then go back to his face.

When your demon is dead, go finish the other. Now, the second phase begins.

In this phase, you're fighting the Demon Prince, who is always burning. Simply repeat the strategy for the burning demon by staying under or behind his legs, as his physical attacks will be almost if not the same. Be wary of two things though: his charge, and his magma shower.

For his charge, he will create some distance between you and himself, and then charge you while leaving fire in his trail. I don't really have advice for dodging him, since I only got hit once, while the other time he tried it on me, he completely missed me, so you're on your own for this.

His magma shower will happen after he makes 2 floating turret-like fire orbs, which is followed up by spewing fire in the sky after making some distance between both of you. Now, I advise you to do what you can to interrupt him, while dodging the projectiles shot at you by the fire turrets.

The three demons can actually be staggered, and then you can land a critical hit by attacking their face.

Finally, just be patient, focus and attack when you can. Good luck!

First of all, if you stay in the ring at the beginning (don't cross the bricks) both demons will always begin with same moves. Staying still and charging R2 to attack the demon who's jump attack barely misses you is a good way to get some easy damage in. Also they do not immediately regroup so focusing on one demon at the beginning and killing it fast before the other drifts too close is a solid strategy.

This phase is all about free camera, staying near one demon to fish for attacks and dodging below it as soon as it attacks. However, unlike with Lud and Zallen in Dark Souls 2, a demon can melee attack you through the other one so staying below one is not a safe place from the other

Three rules of thumb: get near it, walk right and always stay locked on. This way you will mostly trigger short range moves that are punishable just by rolling below it and attacking like before. Staying locked on helps when it jumps up to do explosive punch dive. It is very difficult to dodge blindly. If it does a short jump behind you while you are near, it will always either swing too or punch the floor creating a homing fire trail.

If its right hand slowly forms a fireball it is about to jump up and throw a homing fireball at you. It always jumps little backwards so blindly running towards the direction of where its back was facing usually avoids the attack and let you close in and attack before it recovers.

If it slowly summons two fireballs it is later about to jump away and conjure the meteor shower. Both are excellent opportunities to attack and hope for a chance to stun and visceral attack it. Great thing is, if you stun it during the summoning of first two fireballs, it will do it again after it recovers from your visceral attack.
In conjunction, the below includes a playbook:

1. The boss fight will open up with both the Demon In Pain, which is on the right, and Demon From Below, which is on the left. The Demon From Below will be glowing a bright color, and this is a sign that he is doing melee attacks, and berserking at you. He will start off with a delayed jump attack. Roll into his safe spot, which is his rear and side pelvic region, and get in some hits.
2. In some moments, the Demon From Below will stop glowing, but his brother will start to glow. This means you should focus on the currently glowing brother, as you have to kill both enemies anyway. When a demon is spraying toxic, he is more open to being hit, but it is easy to get flanked by the berserking demon. If you can, hit the demon's head to stun and riposte him for bonus damage. If you can, try to kite the demon who is charging and throwing melee attacks at you so they are separated.
3. This fight is largely about timing stamina. The bosses want you to think that you can deplete your meter, but their follow up combos are extremely powerful (600-900HP damage per attack easy) and you really don't want to get hit by those. Using a shield here will be foolish, as your stamina will be too drained to do the maximum of five rolls needed to attack.
4. The timing for these demons' attacks is among the most irregular in the whole game. You have to really be conscious about your dodges because the Demons try to roll-catch, and wait for you to dodge so they can hit you on recovery.
5. Still talking phase one, the demons will alternate between glowing bright and berserking, so once you punish, get in position to efficiently attack the other Demon. Sometimes, they will both berserk. During those times, just back off, focus on avoiding damage, and let one of them calm down so he won't interrupt you while you are hitting the berserking Demon. Two things you can also do is (again) use the charging demon to separate from the other demon, to buy you some time for hits, as these demons are most dangerous when they are together, hitting you. If you have the charging demon blocking the other demon, you can hit the body part closest to you to minimize the chance of being hit. Very often, hitting the distal portion of its arm will allow you to hit without being hit through the demon
s body, or "wall-banged", by the other demon.
6. Now for phase two. The Demon's special attack is either going to be a persisting beam, or a shower of fireballs, followed by an AOE, and floating chaos fireballs. It doesn't matter which one you kill first, but the laser beam demon (Demon From Below, I think) has a much bigger opening, as he is sedentary for about ten seconds while he is firing his laser in a three attack combo (which, I think ends in an AOE). Again, always leave enough stamina to dodge roll up to five times, because any of the three Demons in this fight can kill you in two hits, easy.
7. For all three parts of the fight (two demons, one demon, then demon prince), keep your punishments short, and focus on out-lasting the bosses. Put the rest of your focus on dodging their insanely fast attacks, as well.
8. The Demons have a berserk attack where they march toward you, and claw into the ground, repeatedly, much like how a gorilla gallops on its knuckles when it is trying to scare off something. Trying to dodge only one claw saves more stamina than trying to dodge both!
9. The Demon Prince (third phase) has an attack where he flies and swoops down, grinding his claws into the ground. For this attack, since there is somewhat of a strange zone of effect, dodge rolling to the sides works much better than to the front and back.

If you have 30 intelligence, equip Pestilent Mist as the damage it deals is a set percentage of the enemy's max HP.

It will deal massive damage in the second phase and some attacks have him standing there without moving for a while. Try to get behind in that situation and cast Pestilent Mist Back off and shoot him with additional spells.

Recommended to exploit both Phases' weakness.

Equip Dorhys' Gnawing, as a fail safe it is recommended to cast Tears of Denial before you drop down into the fight, also to get at least 1 Phantom (Lapp for example) to distract one of either Demons of your choosing.
It is helpful to equip the following rings: Morne's Ring, Ring of the Sun's First Born & Dusk Crown Ring; if possible also equip Carthus Bloodring for better chances of dodging at the cost of weaker defense. This should however not be a problem since the attacks of either demon are slow by comparison.

The tactic is rather simple: Keep your distance and keep casting Dorhys' Gnawing, roughly every 2nd to 3rd hit resulting in bleed-burst damage. Thanks to Farron Ring you will be able to cast a good number of spells before you will have to consume an Ashen Estus Flask.

Should you be mostly melee focused, it is a good idea to use weapons with high bleed capability, as an example, Exile Greatsword infused with Blood Gem but any bleeding build you are comfortable with will work, preferably with greatswords though.

As a personal recommendation, it is suggested to kill Demon in Pain first as the following fusion of both demons has fewer wide-range attacks and slower attacks that can be dodged easily. Keep repeating the previous steps and dodge Demon Prince's attacks and this fight should be no problem.

Demon Prince has 2 different phases, depending on which of Demons (in Pain/from Below) was slain last.

• Because of the differences in body type between the  Old Demon King and the  Demon Prince, it is unlikely that this boss shares any relation to the Old Demon King. 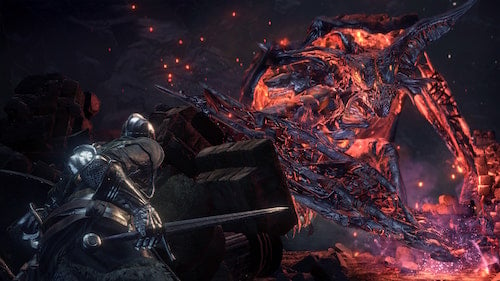