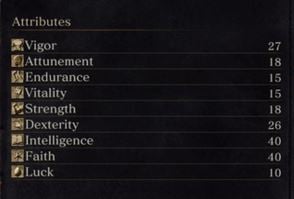 Dark damage is the least commonly defended against, and fire/physical are the most common damages you will face. This build is meant to maximize your dark damage while effectively defending against fire. Bleed can also take off a huge suprise chunk off of players. Dark Onikiri and Ubadachi is one of my favorite weapons, mostly for the leap-dash special. I have found it to be very effective at throwing off the dodge of opponents.

When you start out, always cast Tears of Denial. When going PvP, many players will spam out their attacks until they think you are dead, even if it means they've depleted their stamina. Fortunately, Tears of Denial prevents your health from dropping below 1HP, as well as protects you for half a second after 1HP is reached. With the red tearstone ring, you will find in many PvP matches this will give you the opporunity to wail on your opponent with increased damage. I have finished many a match with only 1HP remaining.

Dorhy's calling is the most incredible miracle you can cast. It deals high damage, tracks to an extent, has low FP costs, moves at a speed that is harder to dodge, and deals massive bleed. Many mobs will insta-bleed when hit. Certain bosses will bleed within 2-4 casts.

Dark is usually very effective against mobs and most bosses. Bleed can also take off a chunk off of certain bosses. It is always good to adjust in PvE based on what you are up against. If bleed is protected against, try switing from a dark Onikiri to a dark Dark Sword. If dark is protected against, try using a chaos Dark Sword. Fortunately, both dark and chaos infusions scale exactly the same with equal intelligence and faith.

When starting out, your first focus should be at attaining 11 Strength and 16 Dex. Your primary weapon at the beginning of the game will be the Uchigatana from the Master Swordsman right outside of firelink. You will then upgrade Uchigatana first using the fire gem from either the burial gift. If you choose to use a different burial gift, you can first upgrade using the raw gem from the crystal lizard, and wait for the raw gem until you reach the fire demon at the Undead Settlement. The fire infusion will get you through the first half of the game, as none of the bosses are strong against it (most are weak), until you reach Yhorm the Giant.

Once those base stats for wielding Uchigatana are met, your biggest focus should be increasing your vigor. 27 vigor will bring you to a solid 1000 health, which is plenty for taking a few hits. Next, increase your strength to 14, so you can weild the early obtainable Dragon Crest shield. Also, I'd highly recommend ignoring intelligence beyond 10 (for magic shield early on), and faith beyond 15 until other stats have been met. Magic Shield comined with your fire sword should carry you on for the first half of the game.

The last half of the game, many of the bosses are very resistant to fire. As you start to level, bring your faith up to 25 to use Dorhy's Calling. Change your Uchigatana's infusion to deep, then dark (depending on if scaling has become effective). Dark damage should carry you through the rest of the game. Bleed will also be effective against all bosses except Yhorm and the Dragonslayer Armour.