Soul of Cinder is a Boss enemy in Dark Souls 3. It is the Final Boss of Dark Souls 3. It is seen as the amalgamation of all the Lords of Cinder, with a variety of Dark Dialectics spells and movesets used during its first phase and the use of Gwyn's moveset for the second phase.


NORMAL MELEE MOVESET. Hardest one to get used to but gives many good openings. Stay near or in medium distance from it and circle to right. The key is to memorize the slow charged attacks so that you don't roll too soon. If you get hit and need to heal, roll away from it and make some distance. This moveset makes the Soul of Cinder highly aggressive, it will attempt to rush you down as soon as you try to gain some distance so hit-and-away strategies are not as effective here as they are with other bosses. It pays off to be aggressive in kind as the more damage you do to it in a short space of time, the closer it gets to being stunned and changing movesets.

MAGE MOVESET.  Keeping close is the way to beat this moveset, as most of its sorceries are activated upon reaching a certain distance from it. Homing Soulmass won't fire behind it and even if it does, simply by walking right you dodge it. It never dodges anything and casts slowly so you have great openings to do serious damage. Pontiff's Right Eye ring helps here (consecutive attacks gives dmg boost). The best opening is the Soul Stream (large beam attack): get behind it while it is casting and you are 100% safe! Remember to keep close, as it will try and leap across the room to get the distance it needs to cast its more damaging sorceries.

LANCE+FAITH MOVESET. Pretty simple to deal with. Get really close to it and circle to the right. Dodge everything (except Wrath of Gods) little right and towards it. Never attack after fast poke, only attack after its heavy attacks and charges.

CURVED SWORD+PYROMANCY MOVESET. This moveset appears intimidating and moves very fast, but hits far weaker than its straight sword moveset. Thankfully its attacks are normally preceded by a spinning wind-up and its attacks are telegraphed. Highly aggressive playstyles suit this moveset, and it is more of a DPS race than anything else. In this moveset it can use the Darkwood Grain Ring flip and use pyromancies such as Power Within, Great Combustion and more. Faster weapons here help but are not required, especially thrust weapons with the Leo Ring if you happen to have them. Best opening is after two heavy flaming slashes. It can do them at anytime but most often after it rolls towards the player. First horizontal slash comes out normally, the second is slightly delayed. The recovery time after the second slash is long enough to sneak in an attack and dodge away.

The Soul of Cinder is resistant to fire, so opt to use dark spells if you work with pyromancy (most preferably Black Fire Orb). Always keep your distance from the Soul of Cinder. The first phase will be the most difficult, especially in its first swordphase. Choose your time to cast carefully, try always to use your spell after it has attacked. Still, your first priority is keeping your distance. Doing so will allow you to attack it while it is missing its attacks at you. During its scimitar/pyromancy phase, you will have ample opportunities to cast spells while it is casting its own pyromancies. Just beware of being hit by its own fireball. Its spear/miracle phase is arguably the easiest. Just beware of its spear charge and continue keeping your distance, and its spinning attack will miss you completely, giving you the chance to lob some spells at it. During its sorcery phase, beware of casting at the same time as it, unless it is using spells that are slower than yours and leave you the chance to dodge. Soul Stream is a good time to deal damage.

During Phase II the boss will have considerably less health, making this portion quicker. An attack you need to be careful of is its jumping slash. This is very fast and will close the distance to you almost instantly. Whenever it wants to do the five-hit-combo, it will raise up its greatsword and charge up the flame for a brief second, which allows you to evade. If you manage to evade being hit during its five-hit combo, it will simply continue doing the combo at nothing. This is a great chance to deal damage, but be careful not to get hit, since any hit during the combo will combo you.

Stab attack (Attack, this is a great opening)

Fast swings (tricky, this can be part of a 3 hit combo, it's safest to attack after the combo ends)

This is a great time to deal some damage with your melee character.

It can use Farron Hail, Soul Spear, Soul Greatsword or Soul Stream but all these attacks are easy to roll under and counter.

Without its blue aura, Soul of Cinder can't summon Crystal Homing Soulmasses and it's very vulnerable as it has no fast attacks.

Crystal Homing Soulmasses have some AI, they are reluctant to attack when your shield is up. They get much more active when you lower your guard.

Its blue aura can last beyond this phase, but if you stagger it, the aura will disappear.

Fast stabs (Block/Roll) These come in too fast to get a hit in with most weapons. The combo can last for 3 stabs.

Strong attack (Circle/Roll & Counter, this is a great opportunity to attack)

Charge (Get behind it, Circle/Roll --> Attack)

Halberd Spin (Roll towards its back --> Attack)

Wrath of the God (Perfect Roll --> ranged attack or heal)

In this mode it is most vulnerable to ranged attacks, like spells or Kukris.

Good openings are when it's casting Fireball, Poison Cloud, Power Within or Combustion

You can also hit it when it's coming at you but it may roll.

The best way to deal with its melee attacks is to block and step backwards.

Sneak in a hit after its combos end.

Power Within may last beyond this phase but the spell will fade if you stagger it.

It is most likely to parry the player while recovering from being staggered in this phase. It is advisable to avoid melee attacks as it stands up.

This is phase 2 and it'll have less health than in phase 1.

Its best attack is a large combo followed by an explosion.

You must never block this attack as it's a real guard breaker.

It's clearly signaled by it holding its sword straight up.

If you see it, try and get away from it. If you break away you can sneak in some Kukris while it's doing the combo.

It can't keep doing that move but its other moves are still good guardbreakers.

The best strategy is to Roll & Counter as much as possible and keep away from its signature attack.

Its kicks, grabs, and smashes are particularly easy to roll under and get in a hit.

After you successfully get past Phase 1, Phase 2 can be cheesed.

Pretty much every single one of the Soul of Cinder's attacks can be avoided by holding up your shield and simply backpeddling towards to the right, while occasionally sprinting or rolling whenever he fires lightning at you.

To beat him easily, stay at a medium-far distance from him, and patiently wait for him to eventually perform his massive slash combo. The instant he finishes it, sprint towards him, get a few hits in, and run back out.

Rinse and repeat until he's dead. It's as easy as that. 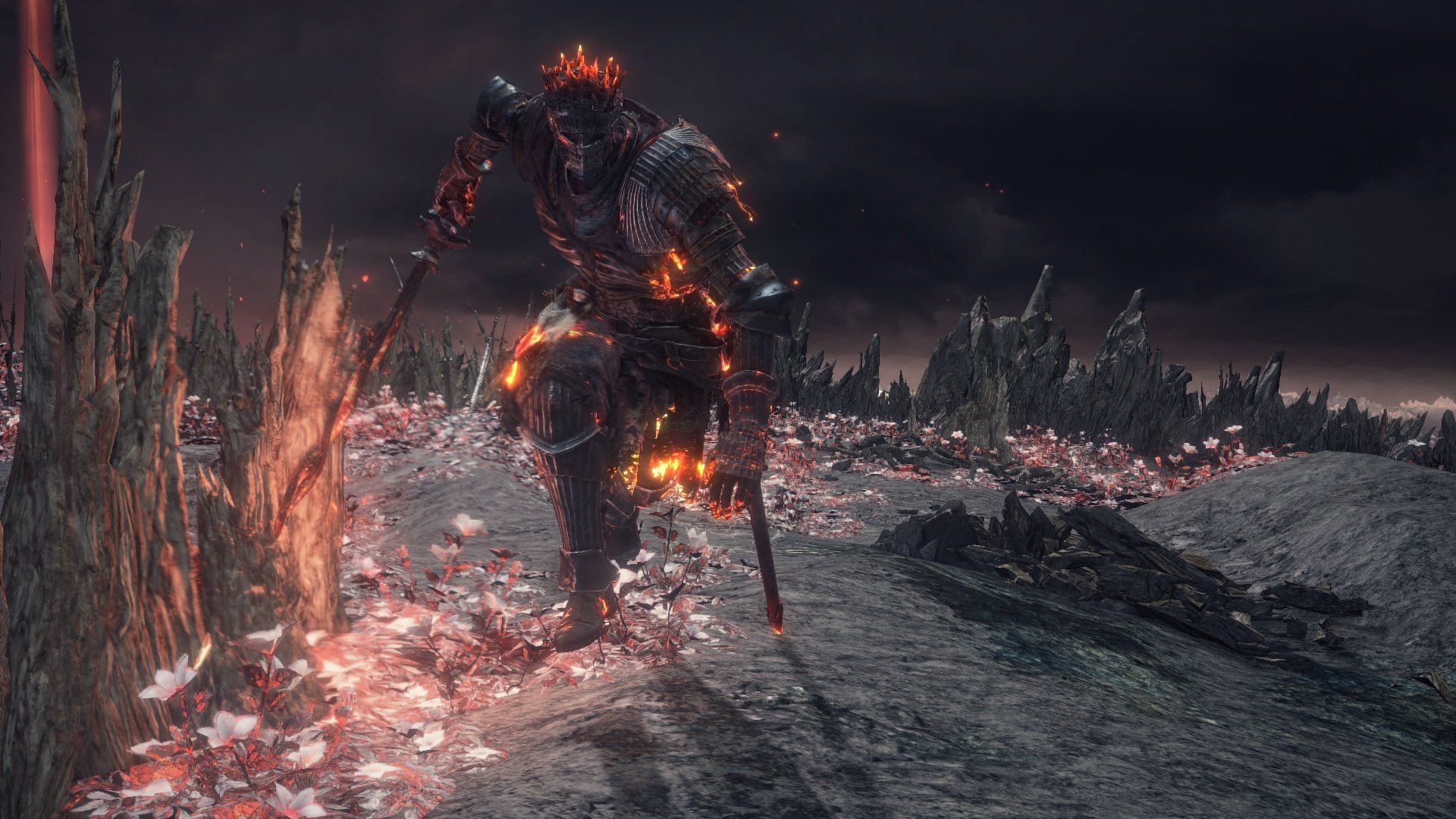 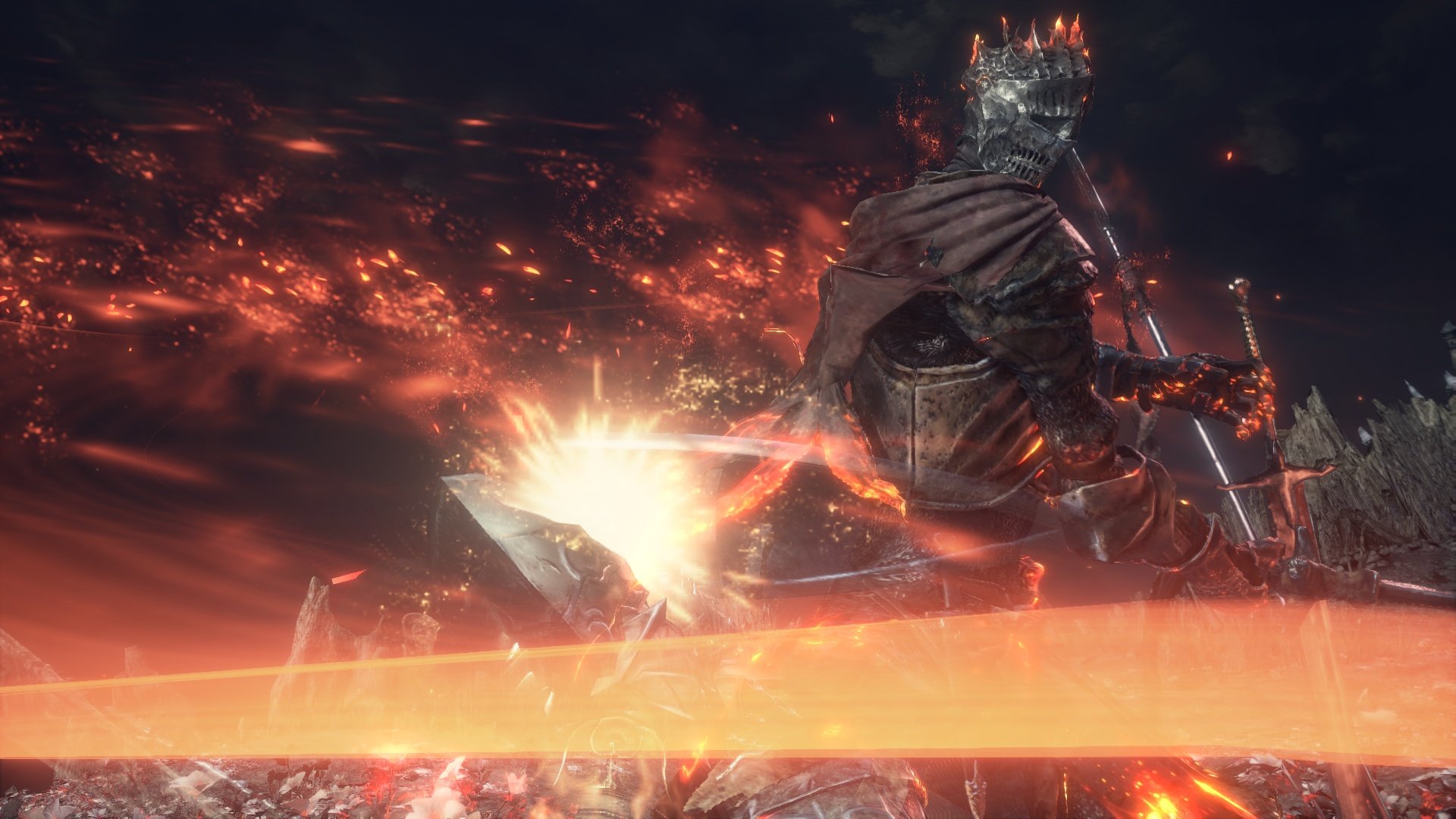 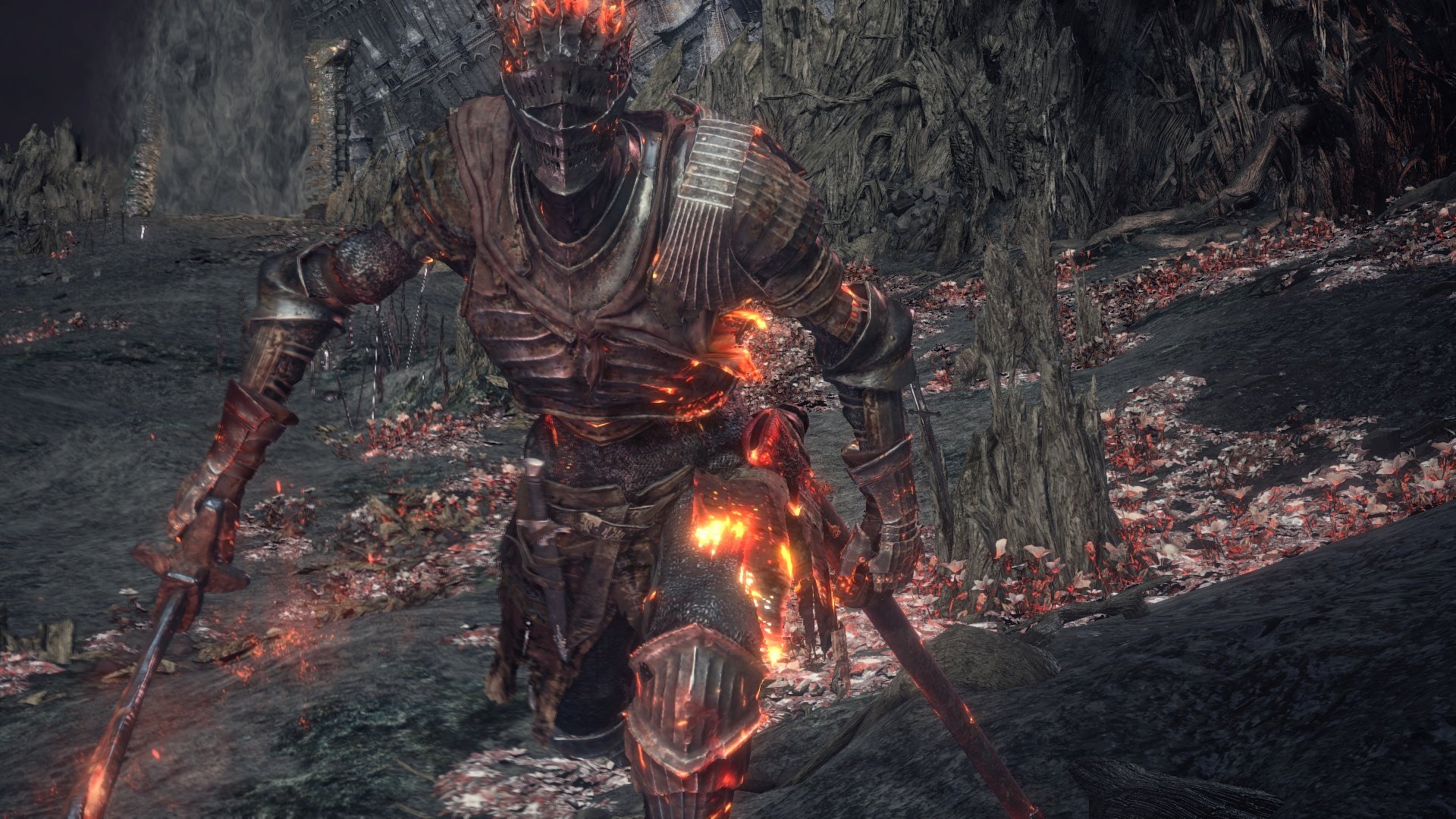 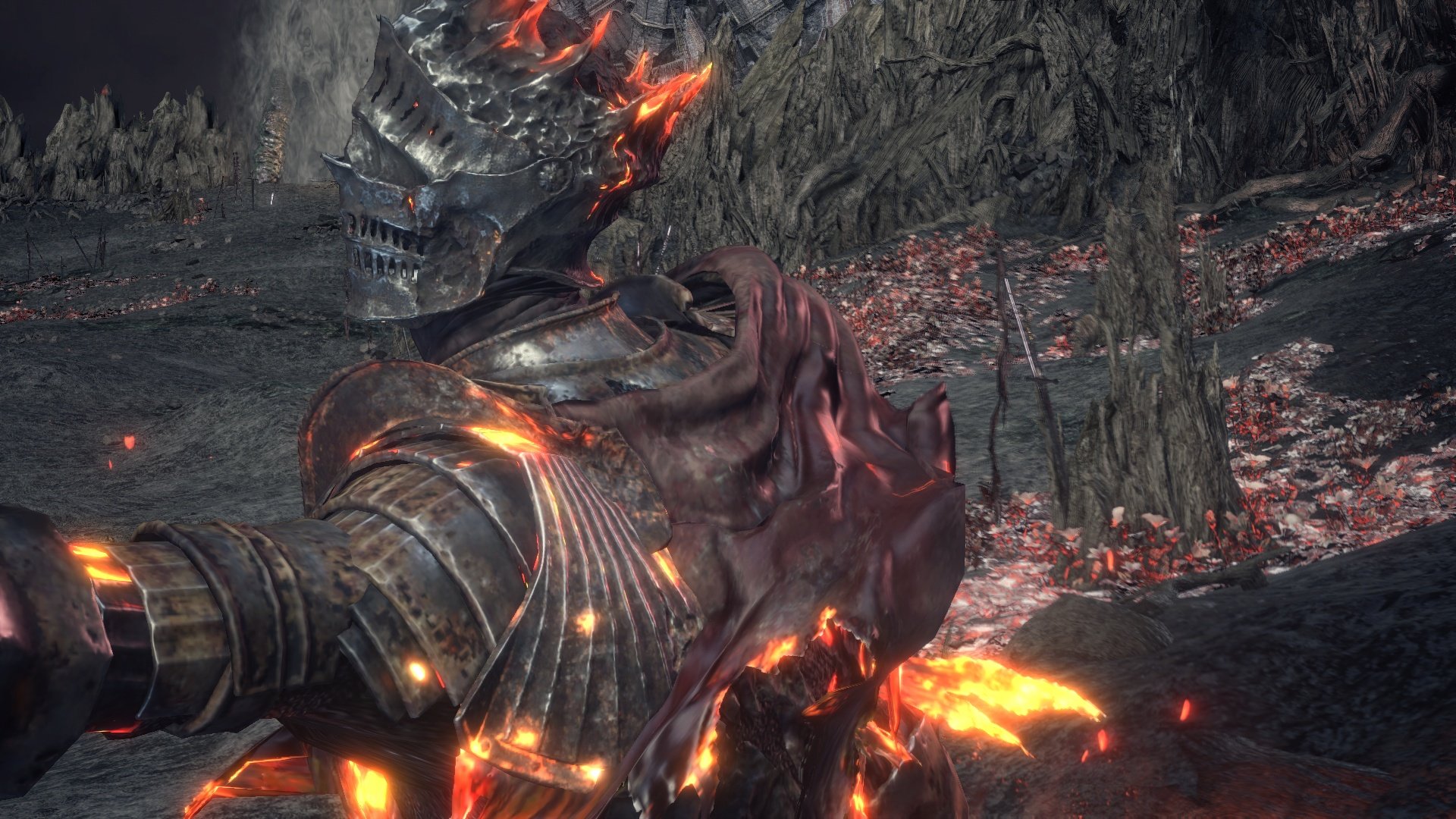