Mimic is an Enemy in Dark Souls 3. 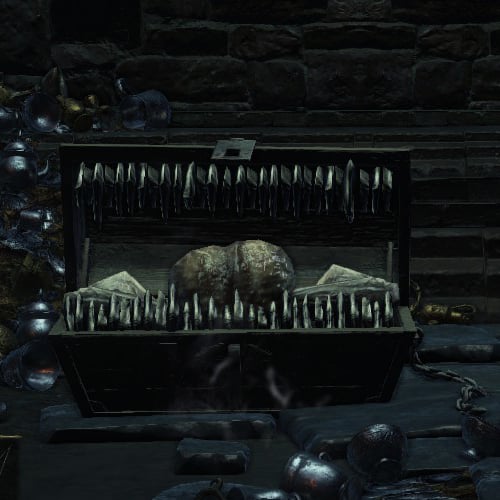 Catacombs of Carthus - Down the rope bridge ladder path to Smouldering Lake, on a ledge above Demon mini-boss - Black Blade

Irithyll Dungeon - Paired with a real chest at the end of rat filled tunnel, beware of a basilisk ambush because after you loot this one about 5 - 6 basilisks will come from nowhere to curse you -  Dark Clutch Ring

Irithyll Dungeon - Right path from the area with the giant and rats coming out from holes in the wall.  Say "Hi!" to Siegward while you're here. - 10x Dragonslayer Lightning Arrow

Profaned Capital - In the swampy, poisonous area get on top of the building.  Where you battle the NPC for Logan's Scroll  look for an open window and drop down.  The mimic is in this room behind a pillar next to the Monstrosities of Sin - Court Sorcerer's Staff

Lothric Castle - Go up the stairs across the bridge where the gold Wyvern is (right side), Mimic is atop of the stairs past the firebomb throwing hollows - 3x Titanite Scale

Lothric Castle - Drop down from a gap in the wall to the left side of the Dragonslayer Armour boss gate.  Where the white Wyvern was earlier there's a room with a mimic in it - Sunlight Straight Sword

Ringed City -From the Shared grave bonfire (before you fend off Midir) head to the bottom of the tower via the curved stairs, till you get to the entrance. head past the entrance and drop to the next level below. head up the stairs until you fall, and head up those stairs, and the first room on the left has a mimic - Ring of the Evil Eye +3.