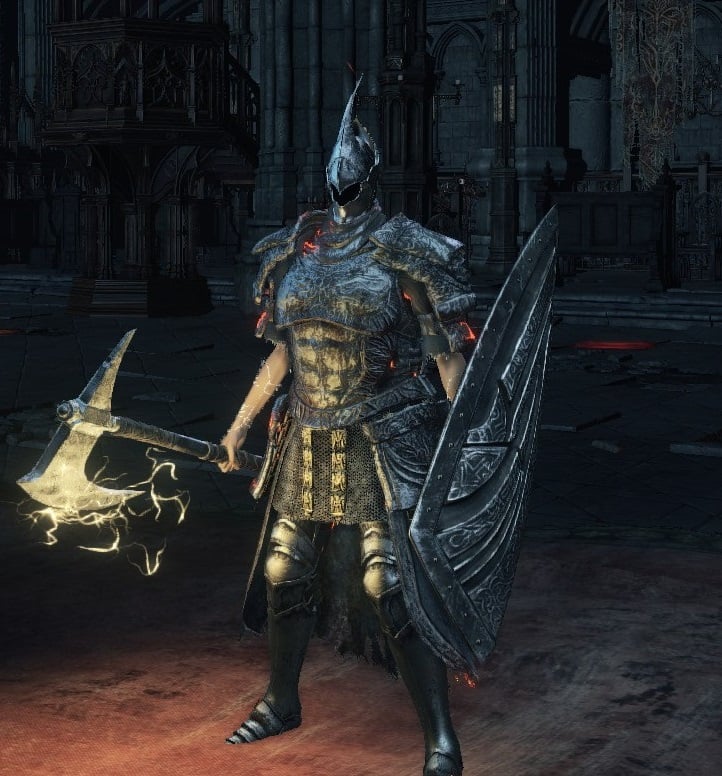 This build focuses on maximizing AR by using the best Raw Weapon, combined with the strength of spell buffs. Using a Raw Dragonslayer's Axe +10, lightning clutch ring, combined with the miracles Lightning Blade and Sacred Oath, will net you an AR of 851. The axe is a very quick weapon, capeable of stunlocking opponents.

For PvE, I'd also recommend getting Astora's Straight Sword, inused with Raw, and upgraded to 10+. Alone, this gives you an AR of 322 of straight physical damage, which can be spell buffed using Dark Blade, Darkmoon Blade, or Carthus Flame Arc if you're up against one of the two bosses that are lightning resistant. A Heavy Barbed Straight Sword is also useful for opponents and bosses particularly susceptible to bleed.

For PvP, I prefer to use Morne's Ring, Ring of the Sun's First Born, and the Canvas Talisman. While the Canvas Talisman has a lower spell buff than Yorshka's Chime, it has the weapon special Unfaltering Prayer. This actually increases your poise (unlike everything else in this game), and allows you to dish out a Sunlight Spear to the face of any R1 spammer you come across, for a one shot kill. For those with heavier weapons, which can break your poise, you're still able to dish out pretty quick and heavy melee damage.

Also, feel free to switch up the armor, but the amor I have listed puts me at 70% equipment load, allowing for quick rolls while maximizing slash resistance (what I see most of in PvP).