Dark Souls III is an action role-playing video game developed by From Software and published by Bandai Namco for PlayStation 4, Xbox One, and Microsoft Windows. The third entry in the "Dark Souls" series, Dark Souls III was released in Japan in March 24th 2016, and worldwide in April 12th 2016.

See New Player Help for an overview of game basics, and Common Souls Terms for an evolving glossary of the community lexicon.

In Dark Souls III the player controls a character from a third-person perspective through the dark fantasy world of Lothric.  The gameplay is similar to other entries in the series, players are equipped with a variety of weapons, items, and magic to battle against enemies.  Similarities to other titles in the series, such as Bonfires, which serve as progress-saving "checkpoints", and Estus Flasks, which serve as health and magic/skill replenishing itmes return. New gameplay elements include the return of the magic meter from Demon's Souls, and a new combat system, giving player's additional weapon-specific skills that provide power-ups or deliver powerful special attacks. Combat is faster and more fluid in Dark Souls III than previous installments, and players' movements, such as backstepping and swinging heavy weapons, are performed more rapidly.

Dark Souls 3 is available on PS4 and Xbox One, as well as PC.

Dark Souls 3 has been generally well received, reaching a Metacritic score of 86 ~ 89 across platforms. You can find a list of outlets and their review links on the Reviews page.

A content-packed, thrilling, exciting and moving rpg adventure sure to rekindle the fan bonfire. Outsanding visuals, setting and design with a strong gameplay backbone and lore finishes, fully worthy of its 59.99 pricetag. We may go hollow from framerate, and the occasionally laggy invasion, but the near-perfect multiplayer has likely settled this as our GOTY 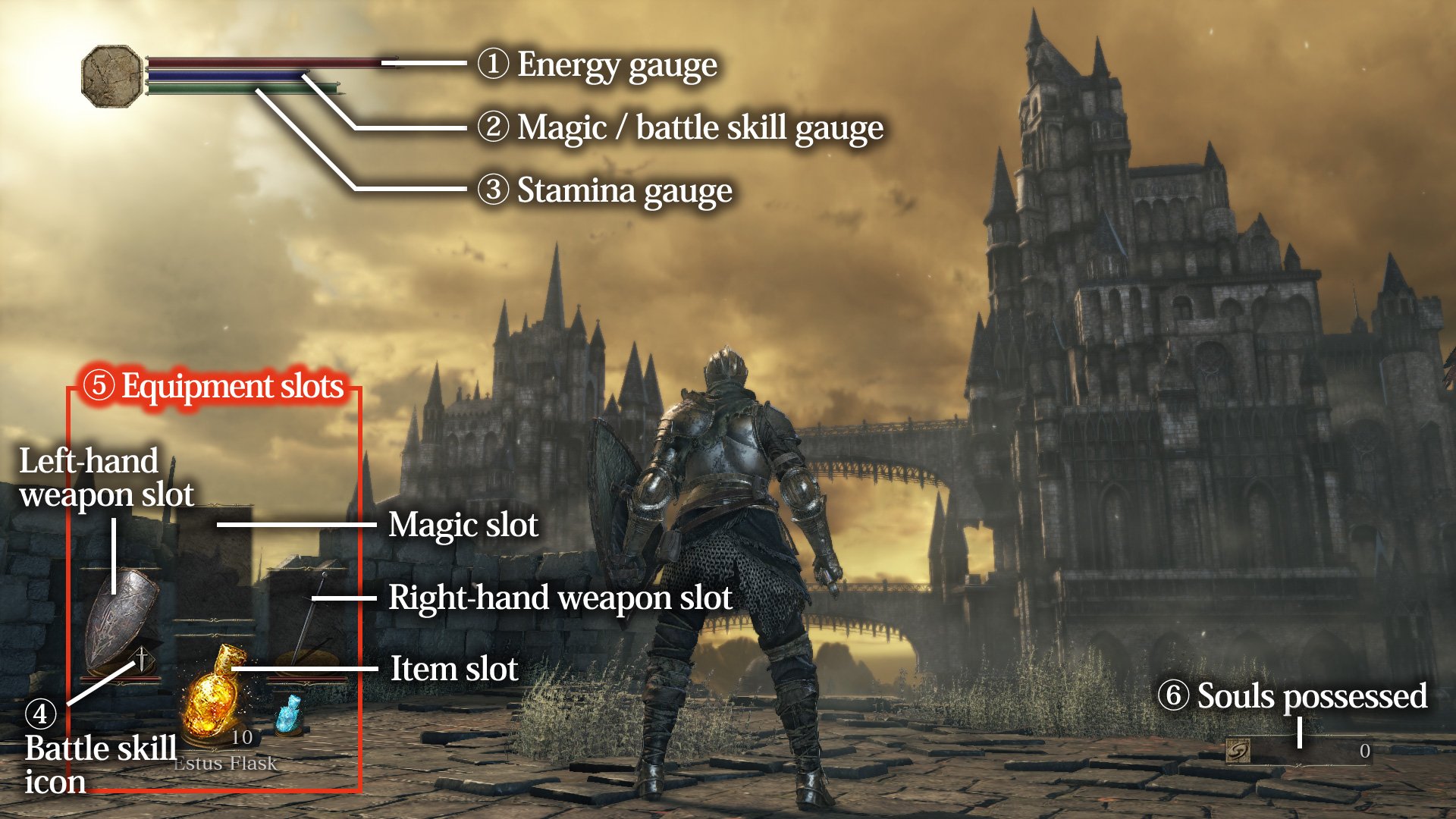 ① Energy gauge
Your current life force. This goes down as you take damage; you will die if it hits zero.
Rest at a bonfire or use an Estus Flask to heal.

② Magic/battle skill gauge
This goes down as you use magic or battle skills.
When it hits zero, you will no longer be able to use magic, and your battle skills will become seriously weakened.
Rest at a bonfire or use an Ash Estus Flask to heal.

③ Stamina gauge
Your current stamina. This goes down as you attack, dash, dodge, or perform other actions.
When it hits zero, you won't be able to use actions that consume stamina.
Stamina automatically refills over time.

④ Battle skill icon
Shows whether you have a battle skill available or not.

⑤ Equipment slots
Shows your currently-equipped weapons, items, and magic.
Use the directional buttons to switch between your equipment.

⑥ Souls possessed
The total numbers of souls you currently have