Epitaphs were Lore Notes in Dark Souls 3's early builds, but were removed from the final game. Distributed around the world, these blue-tinted headstones will reveal hidden lore aspects of the lore and events of the world. 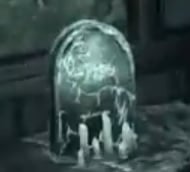 During the Dark Souls 3 Stress Test, 4 Epitaphs were found in the High Wall of Lothric