This is my main PVP/PVE build built around the Dancer’s Enchanted Swords. These weapons are not only stylish and fun to use, but they’re also absolutely viable in both PVP and PVE. 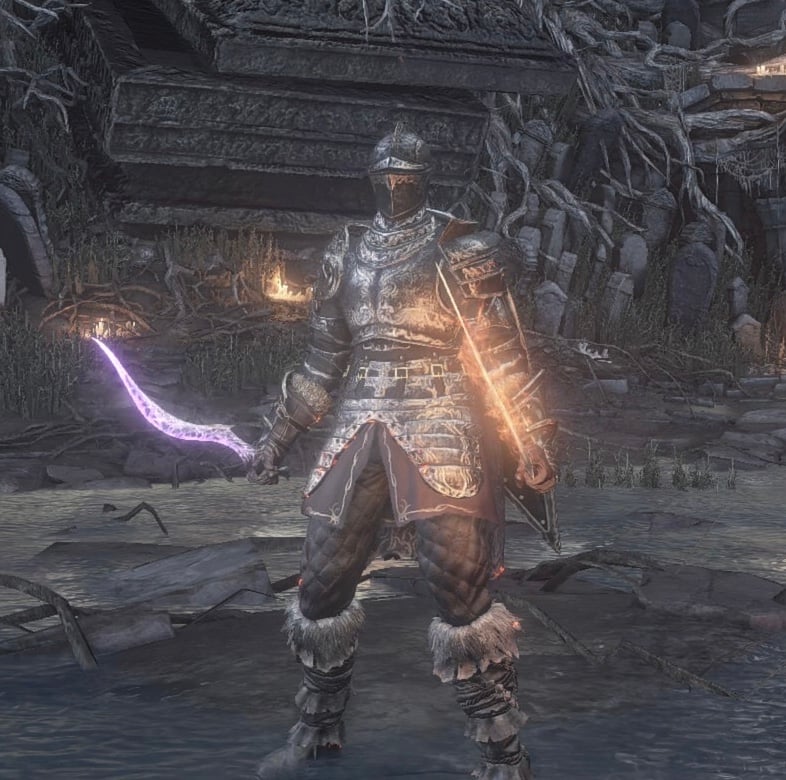 This is a player-created build for Dark Souls 3.

My armor setup was chosen for fashion souls more than for armor optimization. If you value better absorption/poise over appearance, you can replace the Drakeblood-themed armor with parts of  other sets (such as Lapp’s set) instead. You could also elect to use a more glass-cannon build, and move some or all of your vitality points into intelligence instead. There are many things you could do regarding equipment, it ultimately comes down to personal preference.

You could use any of the weapon art shields, not just the Ethereal Oak, to achieve the same effect. If you wish, you could use a parrying shield with more stability, or you could use no parrying shield at all. Feel free to play around with the loadout to find what you’re most comfortable with. Use of a lighter shield(s) would allow you to save points in vitality and put them into another stat, such as intelligence for increased damage.

The Chloranthy +3 and Ring of Favor +3 rings are mandatory. Prisoner’s Chain is necessary for meeting the requisite vitality for this build and for keeping your stamina at 150 (which I don’t recommend going lower than), unless you’re planning on investing more points into endurance yourself. Pontiff’s Right Eye fits very well with these swords due to their high-hit combos. However, if there is another ring that would fit better into your preferred build, either Prisoner’s Chain or Pontiff’s Right Eye are the most replaceable rings.

The Old Wolf Curved Sword increases your attack and restores your health, provided attacking persists. This can stack with both the Pontiff’s Right Eye and Carthus Beacon. The effects of the OWCS will still stack as long as it is equipped either in your hand or on your back. One drawback of this is that it prevents you from fully utilizing the Dancer’s Swords one-handed moveset by not allowing you to true combo R1 or R2 into the weapon art, but if you find yourself rarely using the one-handed moveset, this is worth considering. It will also require you to make some sacrifices with your armor/shields, and/or a greater investment into vitality.

Note: table does not include prisoner’s chain +5 increase to Vigor, Endurance, and Vitality.

The Dancer’s Enchanted Swords scale with four stats: Strength, Dexterity, Faith, and Intelligence. Among these, you should prioritize getting 40/40 in strength and dexterity.

I sacrificed points in endurance so I could invest more in vitality and vigor. I did this partially so I could take more hits, but mostly because I think the Drakeblood set looks awesome with the Dancer’s Blades. You could definitely optimize the armor for better absorption/poise (e.g. by using parts of Lapp’s set), though, so it ultimately comes down to personal preference. I dumped all my remaining points into intelligence to increase my AR as much as possible.

Another viable approach would be to maximize your damage output at the cost of defense by moving some points from vigor/vitality into intelligence. This is a good alternative for those wanting to go the full cosplay route by using the Dancer’s set.

You could also invest more evenly into attunement/intelligence/faith if you want to be able to use some spells. The most notable option for this weapon is the Carthus Beacon (requires 2 attunement slots, 12 INT and 12 FTH), which increases your AR as long as attacking persists, and also stacks with the Pontiff’s Right Eye. This will significantly increase the damage of your L1/R1 -> L2 -> R2 true combo, provided you can keep up the pressure for the 30 seconds until the buff ends. Other spell options include tears of denial, homing soulmass, etc.

In order to use the Dancer’s Enchanted Swords to their fullest potential, you have to make use of their entire moveset. I’m going to assume you’re already familiar with the moveset (if not,  is a video on YouTube going over it) and instead I’m going to talk about how to use them.

These weapons are all about spacing and punishment, and function best with the reactive player.

You will be doing a lot of switching between the one-handed and two-handed movesets based on the situation.

NEVER attempt to prolong the WA for more than one strong attack (do not do L1/R1 -> L2 -> R2 -> R2 -> R2…) The WA only true combos into one R2. If you do more, the opponent will simply roll out of it after your first spin. You will end up doing far less damage, be left with less stamina to work with, and be vulnerable to a counterattack.

Thanks for reading, and have fun with these awesome spin2win swords!