Cemetery of Ash is a Location in Dark Souls 3. This location serves as a starting area for new players to the game. This is where players will find themselves at the start of the game, revived as an 'Unkindled', and will have to face the mighty Iudex Gundyr as a test to prove their worth before heading into Firelink Shrine and being able to explore the lands of Lothric. 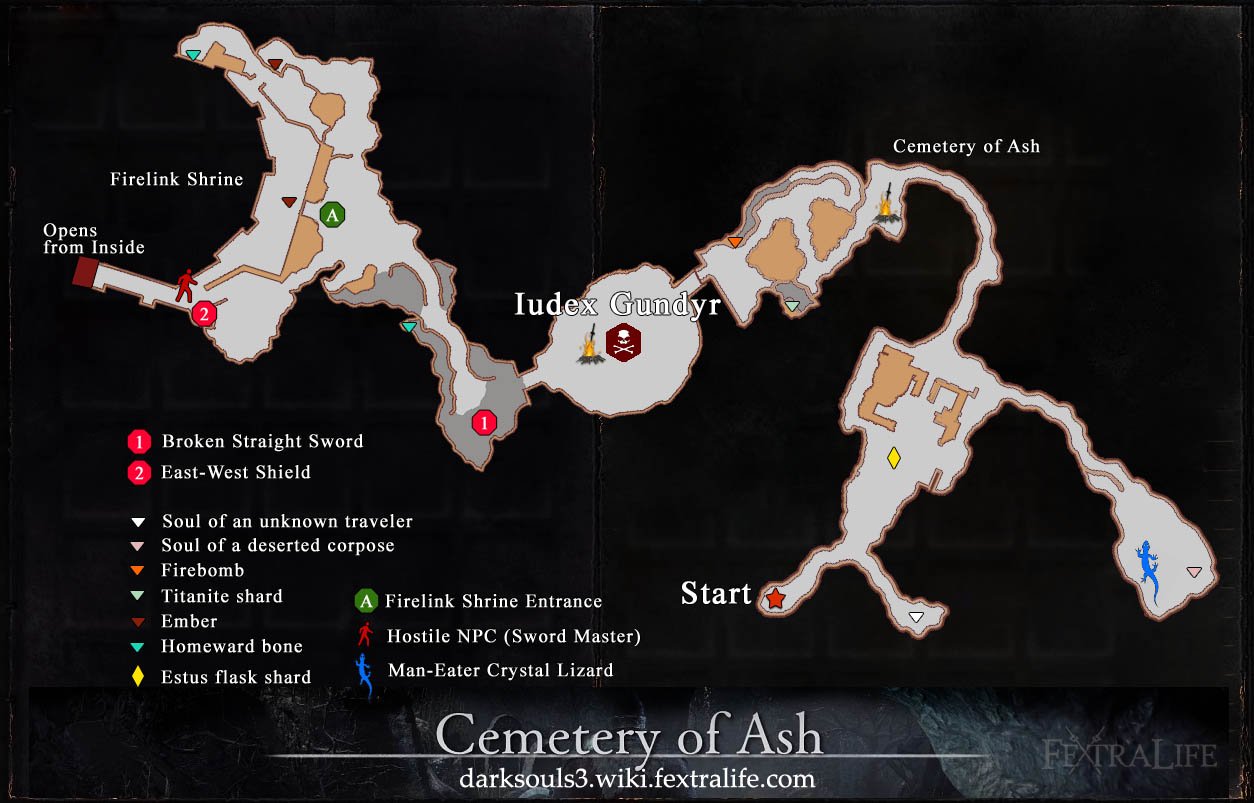 
Getting Your Feet Under You

After character creation, the game begins with an introductory cutscene of your player character rising from a tombstone. Proceed forward and read the messages on the ground which provide instructions on the game's Controls.

Follow the path to find your first enemy. After disposing of him, go right and loot a Soul of a Deserted Corpse. Backtrack to where you found the first enemy and proceed to encounter another enemy in front of a soul vessel like fountain. Loot the corpse by the fountain to obtain the Ashen Estus Flask.

Progressing Through The Cemetery

To the right and up, there is a hollow facing away from you. To the left and up the stairs you will find another hollow. If you continue straight past the fountain, you will encounter a hollow with a crossbow. Taking a hard right from where this hollow is, you will see 2 more hollows. As you progress past them down a narrow waist high waterway, it will open to a wider area where a giant  Crystal Lizard waits. Soul of an Unknown Traveler 1x can be located in this area (Speckled Stoneplate Ring +1 can also be found here in NG+). Defeat the Crystal Lizard to obtain a Titanite Scale 1x. He can be led to the edge by the bonfire to quickly defeat him by making him step/roll off.

Make your way back and continue on to reach a cliffside overlooking a breathtaking view. Head left and you will encounter your first Bonfire. Light the bonfire to trigger the Enkindle Trophy/Achievement and learn the Gesture Rest. Continue ahead along the cliff wall, eliminating the hollows in your path. At the edge a message will tell you how to jump. Jumping here into a small ravine, you can find a Titanite Shard 1x. If you drop down beyond there will be a hollow you can land a jump attack on. It has a chance to drop a Cleric's Sacred Chime. If you backtrack and follow along the cliff edge, you will encounter several hollows and a path leading down along the cliff. At the end of the path you will find a sword and shield hollow and a crossbow hollow. Behind them, against the wall will be a corpse with Firebomb 5x.

In an archway ahead, eliminate the crossbow hollow and enter an open courtyard where you will see a petrified warror. Approach it.

Make your way forward and head down the stone steps that open up to a courtyard where you see the statue of a figure with a sword embedded in its chest. Apporach the statue and you are given a prompt to remove the sword. Remove it to animate the statue and test your worth against the boss, Iudex Gundyr.

Defeat him to receive the Coiled Sword and earn the Trophy/Achievement Iudex Gundyr. Your ember will now be restored, which is similar to the revival mechanic in Demon's Souls. Open the large double doors and proceed out along the cliffs. You will find a Broken Straight Sword by the graves straight ahead. Along the way you will find a Homeward Bone 1x. Ascend up towards the structure at the top of the hill. To the right you will encounter an undead dog and beyond will find an Ember 1x. Go along the left side to find graves and stairs overlooking a cliff. At the junction between two sets of stairs, there is a corpse in a tree on the left with the East-West Shield. To the stairs on the right, there will be two hollows and another Ember. Continuing to the left will take you to Sword Master Saber, an undead wielding the Uchigatana; it is recommended that you level up first before trying to fight him. The easier way to engage him is to just lure him at the edge of a cliff and make sure your back is facing the wall with your shield up. Keep attacking him until he falls off the cliff, he will drop master armor and master attire when you reload the area (either by resting at a bonfire or quitting and reloading).

A fast walkthrough of how to get to the end of the level the fastest, picking up only essential items goes here. Start from game's starting point and run straight to the Ashen Estus Flask. From there run to the bonfire which is straight and up the hill. Run past all the enemies in that area and engage Iudex Gundyr. You may elect to grab the 5 Firebombs to help against Iudex's second form. Speed run walkthrough