Irithyll Dungeon is a Location in Dark Souls 3. Torturous Jailers guard the cells of malformed corpses and decaying abominations while rats scurry away underneath, but the Ashen Ones must venture into the deepest heart of these horrors in their search for the Lords of Cinder. Yet perhaps long lost forms of blasphemous hope can be found within this chasm of despair. 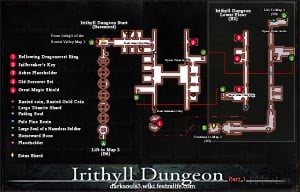 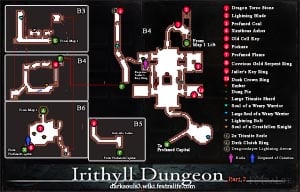 Click here for Lore and Speculation on this location.


Finding the Area and Bonfires

You reach this area from Irithyll of the Boreal Valley by progressing from the Yorshka church, down the steps on the left, and through the large body of water. Instead of heading under the overpass, traverse until you reach the deluged cobblestone shore and an ancient building. Head inside the archway and down to the Bonfire. Descend the steps from the bonfire to encounter two hags and a dancer hiding around the corner to the left. Once you have dispatched these enemies, head to the right to find 2 hags behind a pillar and a corpse with Large Titanite Shard 1x. Back up the stairs you came down is a way to drop down to the right to find a Rusted Gold Coin 1x, but be mindful of fall damage that will result from the drop. Exit this room and follow the stairs outside along the cliff. In a doorway on your left you Alva, Seeker of the Spurned will invade wielding a curved sword and crossbow. Kill him to earn the Murakumo. Continue down the hallway where he spawned and take the stairs down to reach the Irithyll Dungeon Bonfire.

Head straight and in the cell to your left, find a Rusted Coin 1x. The next cell on your left can be opened to find a Large Titanite Shard 1x. The other cells are either locked or inhabited by a hollow. Loot a corpse on the left for a Fading Soul 1x.

Head through the doorway to encounter a jailer. These are difficult enemies that can reduce your health bar and raise your equip burden temporarily. Take him out quickly and turn right. Be careful as there is a hollow hiding in the cell on the right who can push you down; carefully fight him and continue on to defeat a jailer on the left and more hollows in a cell on the right. Find Large Titanite Shard 1x at the end of the path, and a locked door you can open once you find the Jailbreaker's Key (which will lead you to a drop down where you can loot the Bellowing Dragoncrest Ring). Drop down here to the next level to find a hollow and Large Soul of a Nameless Soldier 1x.

Head down this hallway to take out several bursting hollows in a cell. On a corpse in here you can find the Old Sorcerer Set. The last cell on the left contains a Corpse-grub (weak to fire) that drops Great Magic Shield when killed. Head back in the direction from where you came and make a right into a room with some caged hollow clusters and a jailer. There is a locked cell here containing Prisoner Chief's Ashes, that can be opened with Jailer's Key Ring (Obtained through Profaned Capital following the quest to reach Siegward).  Head up the stairs and proceed to take out the jailer in the doorway. Head left and then take your first right across the bridge and go right down the hallway to take out the jailer at the end. Turn around and head down the hallway to find a cell on the right with several hollows. A corpse inside has a Large Titanite Shard 1x. Enter the next cell on the right and step through the hole in the wall on the left to find Pale Pine Resin 2x. Step into the hole into the next cell to find a non hostile lizard type enemy (similar enemies will be hostile later). Open the barred door here and head left and then open the barred door on your left to unlock the hallway connection.

Find the Key and Estus Shard

Make an about-face after opening the door, and head down this hallway to open a cell door on the right where the Jailbreaker's Key is on a corpse. Head back down the hallway, make a left, and take the stairs down to find 3 jailers. In an adjacent cell you will find a gollum looking creature, kill it and loot the Simple Gem 1x.

Exit this room to find two of the caged hollows to either side of you - defeat them and head left. A Crystal Lizard will be here and another creature will attack from a cell on the left so be careful as you chase the lizard. Defeat it and continue forward and exit to a staircase in an open area. Take the stairs down and loot Homeward Bone 2x. Head down the stairs to encounter three hooded enemies. There are two that are visible initially in front of the door at the bottom of the stairs - the one on the right is an archer. The third hooded enemy is seated and hidden on the right on the stairs and will stand up as you pass him.

Enter the the next room and take out the Mimic here for an Estus Shard 1x. Head into the next room to encounter a large group of hooded enemies at the end of the hall, including two archers just around the corner. Loot Soul of a Weary Warrior 1x from a corpse here. Head back in the opposite direction and take the ladder in the doorway on the right and open the door where a giant sleeps. Go back up the ladder and head straight down the hallway, until you see a doorway on the left with a drop. Drop down into the giant's cell and take out the Crystal Lizard, which will rouse the giant. Dash through the door you just opened to get to safety. Wait until the giant is asleep again, and drop back into his cell.

At the bottom of the room with the giant and rats there is a elevator you can take up to unlock a door which is a shortcut leading you back to the first bonfire. Take the lift back down, and on the opposite side there is another room with a Mimic that drops Dragonslayer Lightning Arrow. In that room, there is a ladder next to the torch on the wall. This leads to the item on the wooden roofs above the giant. Climb up and go through the little opening. Make the jump across and Lightning Bolts will be on the dead body. Head right and take the ladder down and follow the narrow bridge to find a Pickaxe.

To the right is a sewer with three rats; take them out and go forward. Halfway up the stairs you can find Soul of a Weary Warrior 1x. At the end of the sewer, you will find two chests. The one on the right contains the Old Cell Key. The one at the left is a Mimic that will drop the Dark Clutch Ring. Upon opening the chest with the key, several basilisks will spawn behind you where the rats were, so be wary. Head back down the sewer and down the stairs where you looted the soul to make a left through a tunnel. In this room are two giant rats on your left. Defeat them and loot Dung Pie 4x. Open the door here and slowly proceed as the next room is infested with Jailers! To the left, you'll find a Large Titanite Shard 1x.

Head left out of this room and take the stairs up. As you exit outside to the left you will find the Dragon Torso Stone. This is the area you will return to use the Path of the Dragon gesture you obtain after defeating Oceiros, the Consumed King. This will grant you access to Archdragon Peak. Continue into the doorway and step on the pressure plate to activate the lift. Take the lift to the top and step forward to find a corpse with Large Soul of a Nameless Soldier 1x. Open the door to the left to unlock the shortcut to this portion of the dungeon.

Step back on the lift and stay faced in this direction when activating the pressure plate. As the lift descends, step off to a window ledge containing a corpse with Lightning Blade. Drop down from the ledge to reach the exterior where you found the Dragon Torso Stone.

Go back inside the dungeon and straight into the large room where you will find several jailers. Luring them one by one is a good strategy here as their effects can be overwhelming. The next room has another two jailers. In the first room the first door on the left side is full of the 4 legged creatures. Kill them and loot the Profaned Coal which you can give to Blacksmith Andre to unlock additional infusion Upgrades. You can open the barred door and step out. Head left down the hallway where you will find a Mimic containing Titanite Scale 2x. Back in the main room you can loot the Alva Set and an Ember 1x provided you killed Alva's invading phantom. In the next room you will find another Ember 1x.

Head up the stairs on the right in the second room and head right down the hallway. At the end of the hallway on the left will be a locked cell holding Karla, who teaches Pyromancies, Sorceries, and Dark Miracles. Unlocking her cell requires obtaining the Jailer's Key Ring from Profaned Capital. The instructions on how to backtrack to unlock her cell are in the Profaned Capital walkthrough. Back in the second room, on the left wall, open the gate and enter the cell to find Xanthous Ashes and Dusk Crown Ring. The opposite gated cell has a Lycanthrope that is hostile towards the Jailers, unleash at your own risk.

Proceed forward out of the room and take the stairs down. Follow the stairs and continue along the left to find a Large Soul of a Weary Warrior 1x. Return to the narrow stone bridge where you will enter the Profaned Capital and continue your journey towards the Lords of Cinder. On this bridge a Gargoyle will drop down to stop your progress. Defeat it and cross the bridge to come to a broken path. Take the ladder down and across the room take the ladder up to the planks where you will find the Stretch Out Gesture and Undead Bone Shard 1x and nearby a Bonfire. 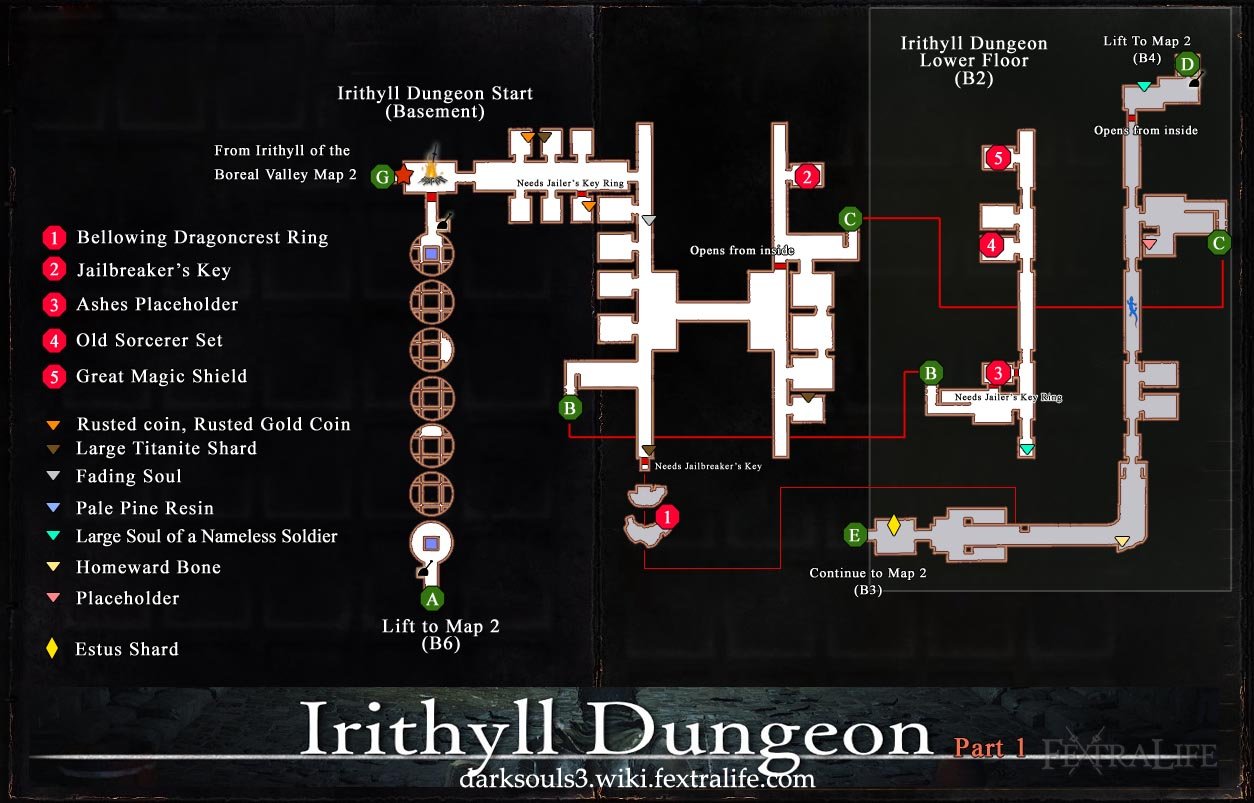 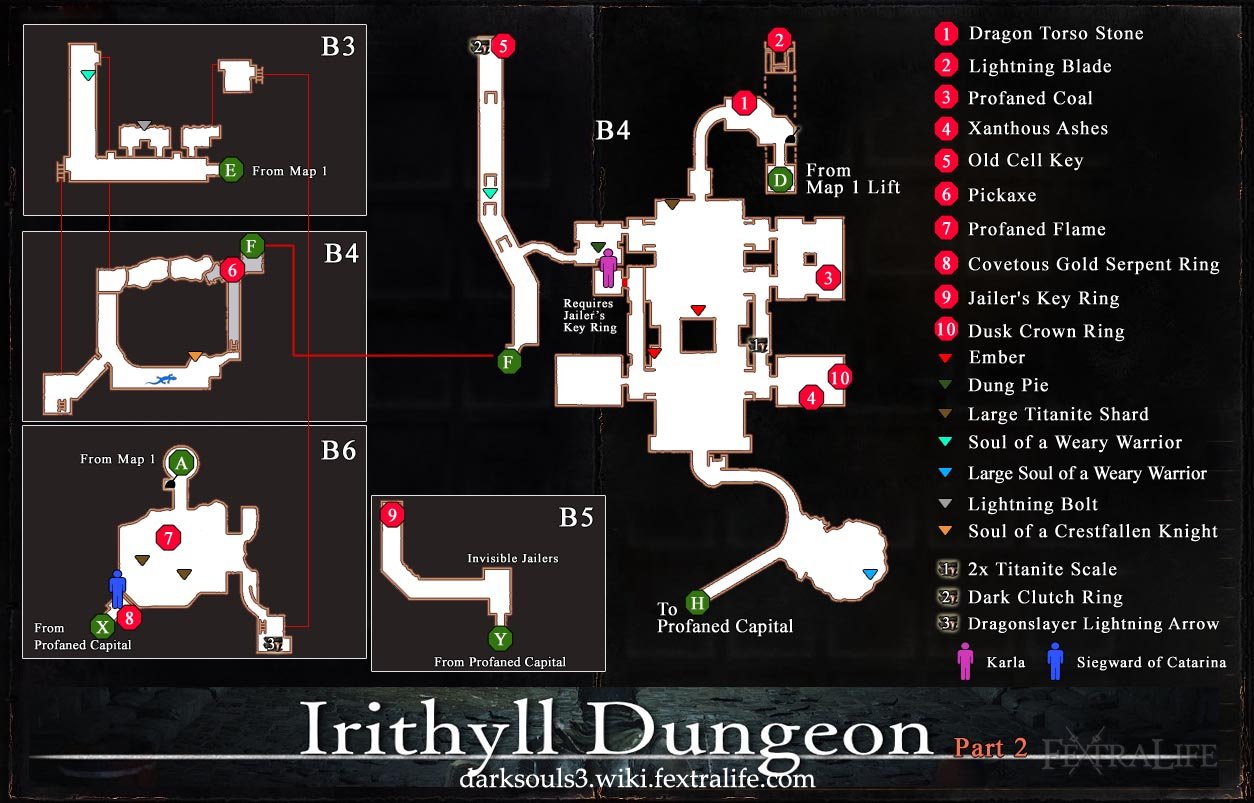