Firelink Shrine is a Location in Dark Souls 3. After defeating the first boss, the unkindled find this safe haven, where they may level up via the Fire Keeper, or interact with other NPCs who have sought the safety of the hub. 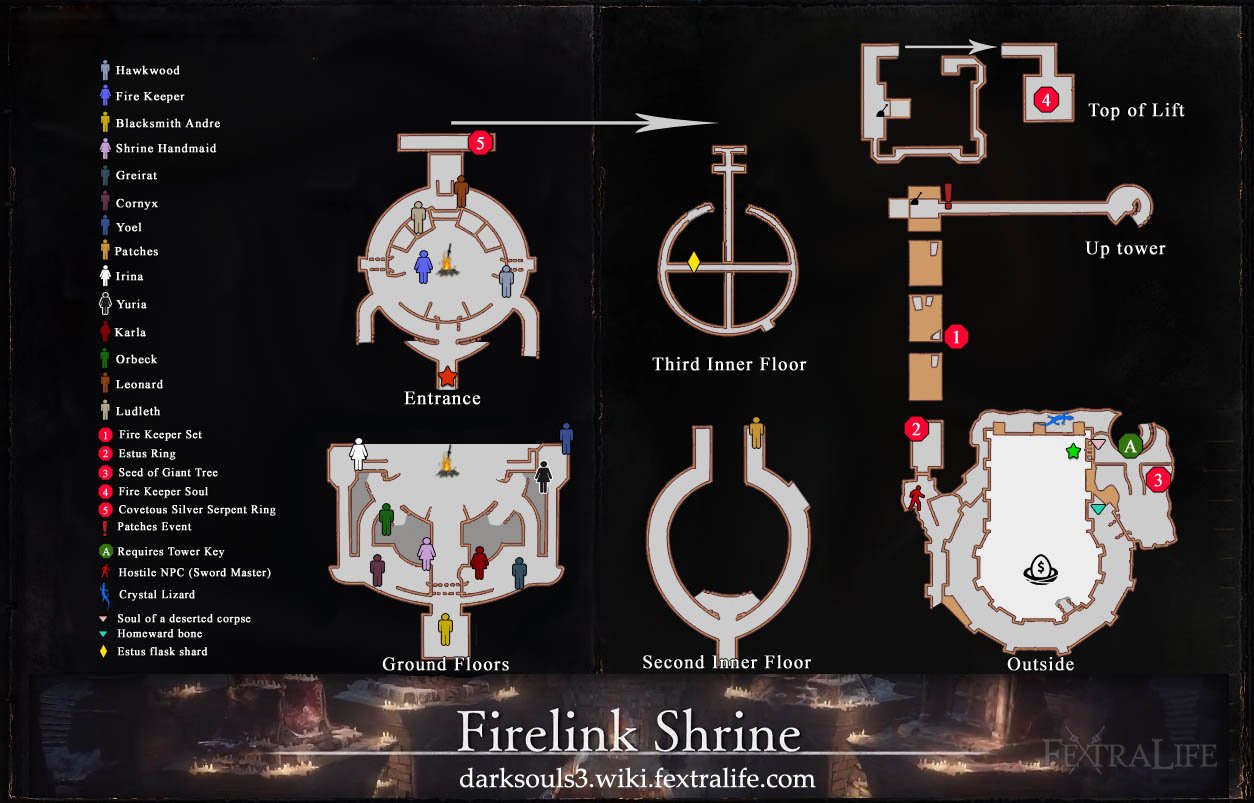 After boss-fight with Iudex Gundyr open the large double doors and proceed out along the cliffs. 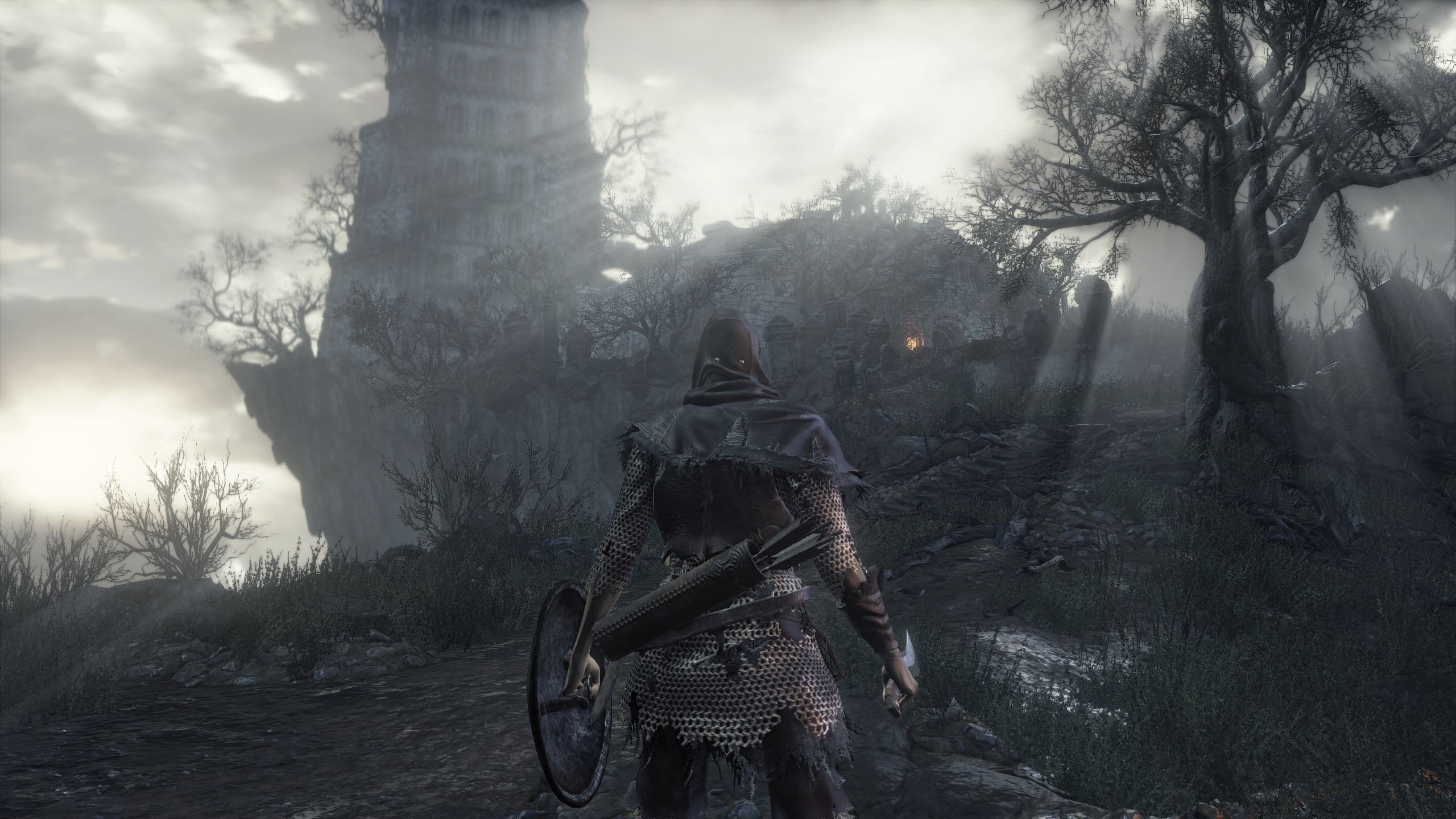 You will find a Broken Straight Sword by the graves straight ahead. Along the way, you will find a Homeward Bone 1x. Ascend up towards the structure at the top of the hill. To the right, you will encounter an undead dog and beyond will find an Ember 1x. Go along the left side to find graves and stairs overlooking a cliff. At the junction between two sets of stairs, there is a corpse in a tree on the left with the East-West Shield. To the stairs on the right, there will be two hollows and another Ember. Continuing to the left will take you to Sword Master Saber, an undead wielding the Uchigatana; it is recommended that you level up first before trying to fight him. The easier way to engage him is to just lure him at the edge of a cliff and make sure your back is facing the wall with your shield up. Keep attacking him until he falls off the cliff, he will drop master armor and master attire when you reload the area (either by resting at a bonfire or quitting and reloading).

Upon entering Firelink Shrine, before you will be 5 large stone thrones, all vacant but one, where Ludleth of Courland sits. The thrones have inscriptions on their backs, identifying the being who occupied them, such as Holy King Lothric, last of his line. Firelink Shrine itself is quite large, similar to the Nexus in Demon's Souls with staircases up and down where you can explore for items and more tutorial messages. Look out for the rare friendly NPC whom you can recruit and add to the shrine's inhabitants.

Descend the stairs on the right side towards the center area, speaking to Hawkwood seated near the bottom to learn the Collapse Gesture, and then speak with the Fire Keeper at the center. She will make herself available for leveling up and explain the next part of your journey.

Embed the Coiled Sword into the fire pit in the center of the room, thereby igniting the Bonfire. From here you may teleport to other locations. The only one available right now is the High Wall of Lothric, so teleport there if you don't want to explore Firelink.

Teleport to new areas with the bonfire

Explore the area of the shrine to meet and interact with other NPCs. On the ground level, you will find the Shrine Handmaid who sells a variety of goods, and Blacksmith Andre who performs Upgrades. You may purchase the Tower Key from the Handmaid for 20,000 souls, which will let you access another area here where you can find a Fire Keeper Soul. The Shrine Handmaid also accepts Ashes, which will unlock additional items for sale. Move up the stairs behind the thrones and explore to find Leonhard the Ringfinger, who will give you cracked red eye orbs, an invasion item for multiplayer, as well as progress his questline.

As you progress through the game other NPCs will populate the Shrine, after certain conditions have been met. Look out for additional merchants and quest givers to fill up the shrine.

Check with NPCs from time to time, defeating Bosses or discovering areas may trigger extra rewards or new quests.

Black Smith Andre can upgrade weapons with titanite, found from foes or treasures.

Heading up the stairs right from the entrance, you can step outside, where you will see a petrified Giant Tree. Examining the tree will give the message "a seed of a Giant Tree is yet to fall". Continuing past the tree and up the stairs, you come to a tower and a corpse where you can loot a Soul of a Deserted Corpse 1x. The tower gate is locked and can be unlocked with the Tower Key, which can be purchased for 20000 souls from the Shrine Handmaid. At the top of this tower's spiral stairs, you can cross a crumbling stone bridge here. In the next tower, activate the pressure plate on the lift and take it to the top. Ascend the stairs to the top of the tower where you will find a corpse with a Fire Keeper Soul 1x. Depending on your progression in the game, Patches may show up here and trap you by closing the grated door leading to the bridge. You can jump down from one side of the bridge to a short lip to find a corpse and loot the Fire Keeper Set. From the other side of the bridge, you can drop multiple times to ledges and find the Estus Ring as loot. On this level, you can exit via a grated door to escape his trap. Beware, however, as a katana-wielding master awaits you just beyond. Killing him will earn you an Uchigatana and the Master's Set.  The tree ahead of you as you look back towards the entrance to Firelink Shrine contains a corpse holding the East-West Shield. Moving forward there are 2 hollows here and a corpse with an Ember 1x.

Halfway across the bridge from the tower, you can drop down to a ledge on the left and from there drop down to the roof. In the center of the roof, you can find a nest where you will meet Pickle Pee, Pump-a-Rum the Crow with whom you can trade items.

There is a ladder that you can kick down outside on the roof edge, near the tree you can use to get on the roof,

You can also enter back into Firelink from this roof at a higher level and walk across a narrow rafter to loot an Estus Shard 1x. If you proceed down a long rafter you can strike the wall to reveal an Illusory Wall. At the end of the rafter, you can drop down to a lower walkway where a chest lies with the Covetous Silver Serpent Ring.

If you drop down from the roof you can find a Crystal Lizard.

When you are ready to proceed, return to the bonfire and travel to the High Wall of Lothric. You may return to this hub any time to level up, perform Upgrades, and more.

Videos: Use Links Only. You must be one of our Youtube Partners and follow the guidelines given to add your walkthrough video.

The Firelink shrine is a hub, therefore you do not need to do anything specific. Make sure you get the Estus Shard at the top beams sections as depicted on the map, and get the Crystal Lizard for upgrade materials. Everything else is optional.

One common technique for defeating Sword Master Saber early in the game involves knocking him off the cliff. If you quit your game and reload, the Uchigatana drop will be available near where he fell.

Access rooftop for early advantage by tree jumping in this shown location: 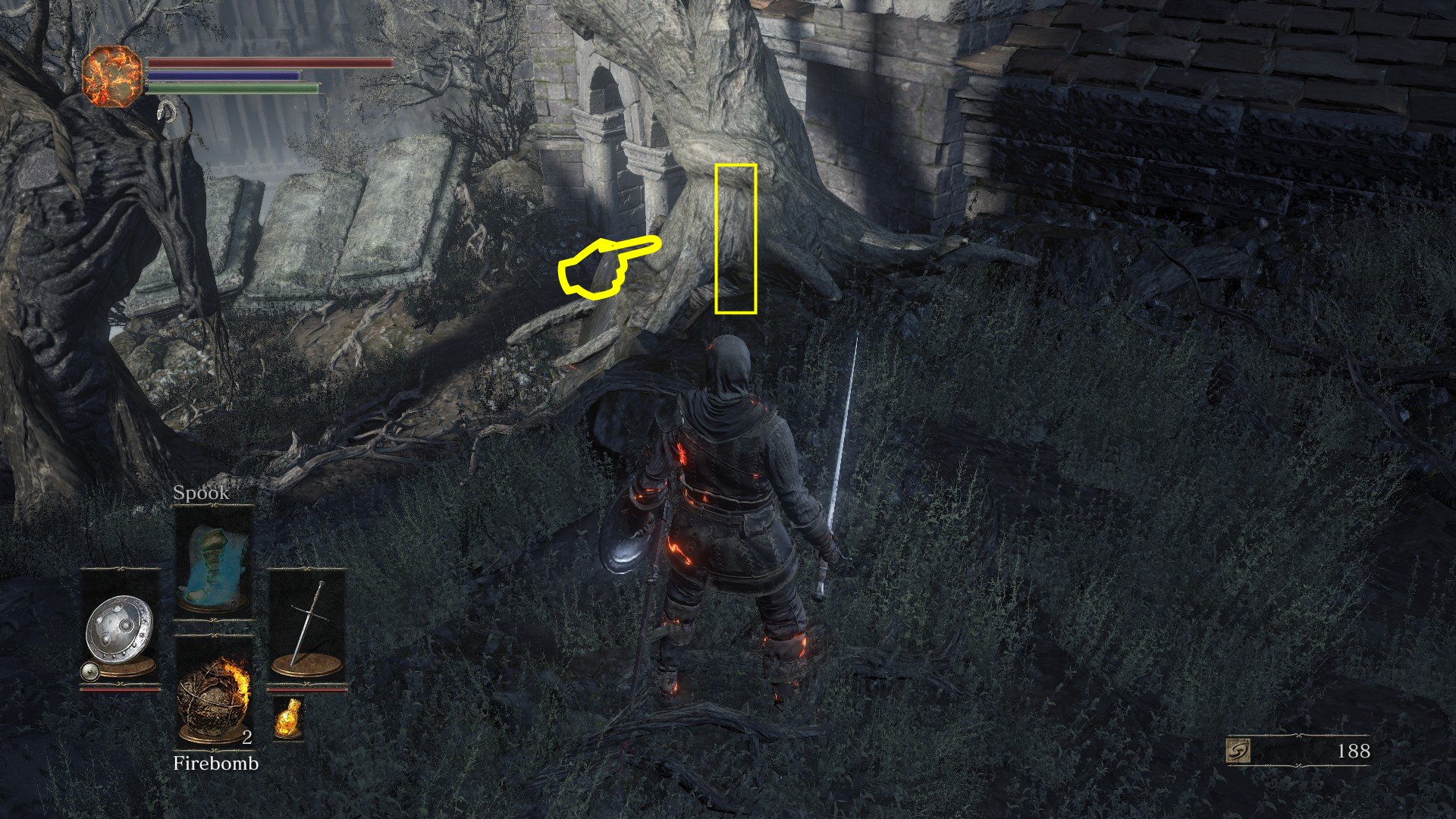 Sprint towards the yellow box, then strafe right and jump. Failing a few times is common. Video Example of Jump