Cornyx of the Great Swamp is an NPC in Dark Souls 3.  Cornyx teaches pyromancies, acts as a merchant, and upgrades the Pyromancy Flame.

Cornyx of the Great Swamp's Information 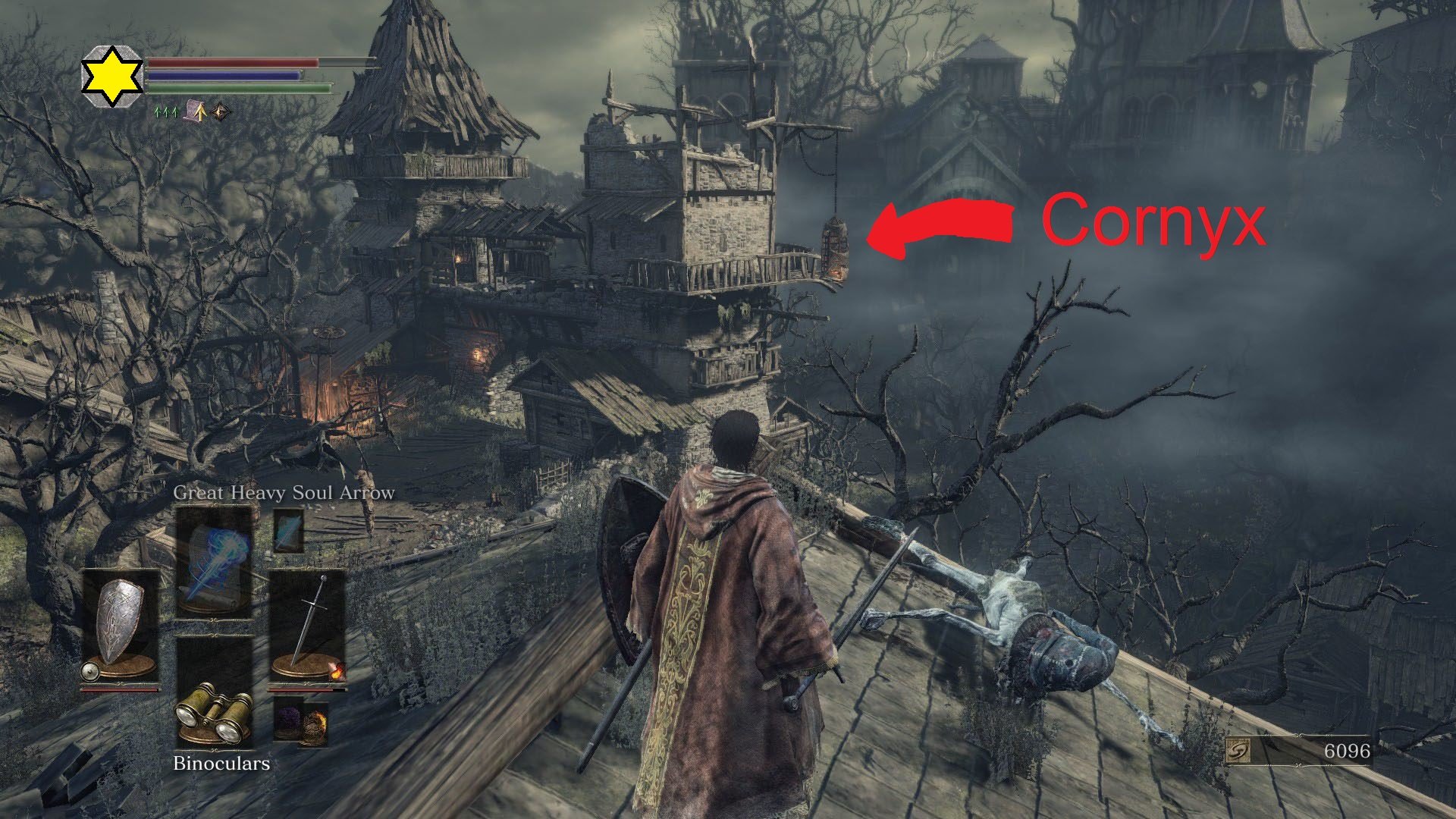 Ah-ha, Unkindled are we?
Welcome to my abode.
I am Cornyx, an old pyromancer.
A crow in his cage as you see, now.
But here we are, an encounter for the ages!
I hear the Unkindled make for fine vessels.
Care to learn pyromancies from this old man?"

Most wise. A chance encounter should not be squandered.
To reiterate, I am Cornyx, of the Great Swamp.
The pleasure is mine."

(snickers) Most foolish. This old crow has a little knowledge on his own, you know.
Bah. No sense in spelling it out.
I will not rush you. You will return, once you are enlightened.
We are, after all, both Undead. And both prisoners in our own ways." (snickers)

Ahh, there you are, Unkindled One.
I wish to express my gratitude.
For trusting a lowly pyromancer, and allowing me to gaze upon this majestic flame.
As promised, I will impart pyromancies to you.
But first you will need a flame of your own (Gives Pyromancy Flame).
Careful you don't burn yourself with it."

Heed my words, Unkindled One.
Fear the fire.
The home of pyromancy, Izalith, was scorched by the very fire it created.
Undoubtedly, it was a flame of chaos, tangled by a witch's hand.
But who's to say that this Bonfire's flame is any different."

Well, well...I've never seen anything like this.
This inscription...this tome is from the Catacombs.
Fascinating. On this day, the teacher learns alongside the pupil." (laughs)

Ah, what have we here! A pyromancy tome from Izalith!
Then you've found the home of Pyromancy.
Brilliant. I will never curse being old and Undead again.
Now, now, show it here, quickly. Let us channel them together.
The primal pyromanices known only to old Master Salaman!"

Ahh, what have we here...
By the gods. This inscription reads Quelana, the ancient deity, one of the witches of Izalith...
The last of them, who wandered the lands. Then she must have returned to Izalith, after all.
But I regret to say, I cannot accept this.
Quelana's pyromancies are for witches, and must be learned from a mistress.
But thank you, for allowing me to peer upon such a thing.
If only I were a woman." (ha!)

I'm afraid I cannot accept this.
This pyromancy tome is dark, and delves into the depths of men, where an untouchable flame resides.
I cannot comprehend this myself, let alone teach it to you.
It is a spell forbidden in the Great Swamp, and nearly everywhere else, too.
Only one terribly afflicted, or burdened by deep sorrow, could begin to understand this."

"Fine, fine, I see how it is.
When a pupil strays from the path, the master must intrude."

Spare the rod and spoil the child."

Killing him in his cage

Little bird, what's to be gained?"

Do not be gone for long. What's a teacher without a pupil?"