Untended Graves is a Location in Dark Souls 3. It is reached through the Consumed King's Garden and is an optional area. Shrouded in darkness, but will upon further inspection reveal a familiar place. 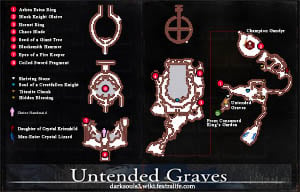 Untended Graves is a hidden, optional area in Dark Souls 3. The area can be accessed via an illusory wall behind a chest after Oceiros, the Consumed King's boss room. The area is a replica of Cemetery of Ash, but shrouded in total darkness and occupied by different enemies. Click here to go to the speedrun section.

From the Bonfire, proceed forward and head down the path to the left. You will encounter a group of Corvians that you first encountered in Road of Sacrifices guarding an Ashen Estus Ring. Head back in the opposite direction to find Soul of a Crestfallen Knight 1x on a corpse in front of a vessel.

Take a left up the stairs to engauge a fire casting hollow and dog. A corpse ahead will have a Titanite Chunk 1x. Ahead further you will find a another Titanite Chunk just past the stairs. If you head right into the pool here you will encounter some Undead dogs and Cathedral Grave Wardens.

Head to the right section of this area, where you encountered a Ravenous Crystal Lizard in Cemetery of Ash. There will now be two in this location after wading through the water.

Head out the center path, following it to the left up the hill. This will trigger invasion by dark spirit Daughter of Crystal Kriemhild. Defeat her and proceed down the path to the left. Down the drop in the corner, you will find a corpse with Hidden Blessing 1x. Defeat the remaining hollows and step into the arena. The Sword Master can be summon at the arena entrence for the Champion Gundyr boss fight.

The area boss, Champion Gundyr will be crouched, surrounded by candles. Approach him to start the battle. Defeating him earns you Soul of Champion Gundyr.

In this arena you can find the Black Knight Glaive on a corpse by the broken wall. Light the Bonfire and exit via the closed double doors. Take the path to the right up to find a Black Knight with a greataxe, and beyond another with a greatsword.

To the left of the Shrine's entrace, head up the series of stairs and another Black Knight will attack from the right. Kill it and head to the top of the stairs to find the Chaos Blade where the Sword Master spawned in the normal Firelink Shrine. Head back down the path hugging the left to go up some stairs. At the top you will find a corpse with Soul of a Crestfallen Knight 1x. In the graves in the grass in front of this area (where the dog spawns in normal Firelink) you will see a Black Knight guarding a Hornet Ring on a corpse.

Make your way into the entrance to dark Firelink Shrine. Approach the vessel where the bonfire would be to find Coiled Sword Fragment 1x. If you head down the hallway you will find an alternate version of the Shrine Handmaid. She has a unique inventory: Wolf Knight Set, Priestess Ring, and 2x Ember. Inside the shrine you can find the Blacksmith Hammer where Andre would be. If you head down the hallway where Irina had been you will come to an Illusory Wall. Beyond you will find Eyes of a Fire Keeper.  In NG+2 behind the throne of Prince Lothric (largest and centermost throne), you can find the Life Ring +3. You can also find Hollow Ashes  on the hollow sitting where Yoel is located (if you have not progressed Yoel's Quest line). Upstairs and outside, there may be a Seed of a Giant Tree.

When you are finished exploring, you may port out via a bonfire, Homeward Bone, or your newly found Coiled Sword Fragment to continue your journey. 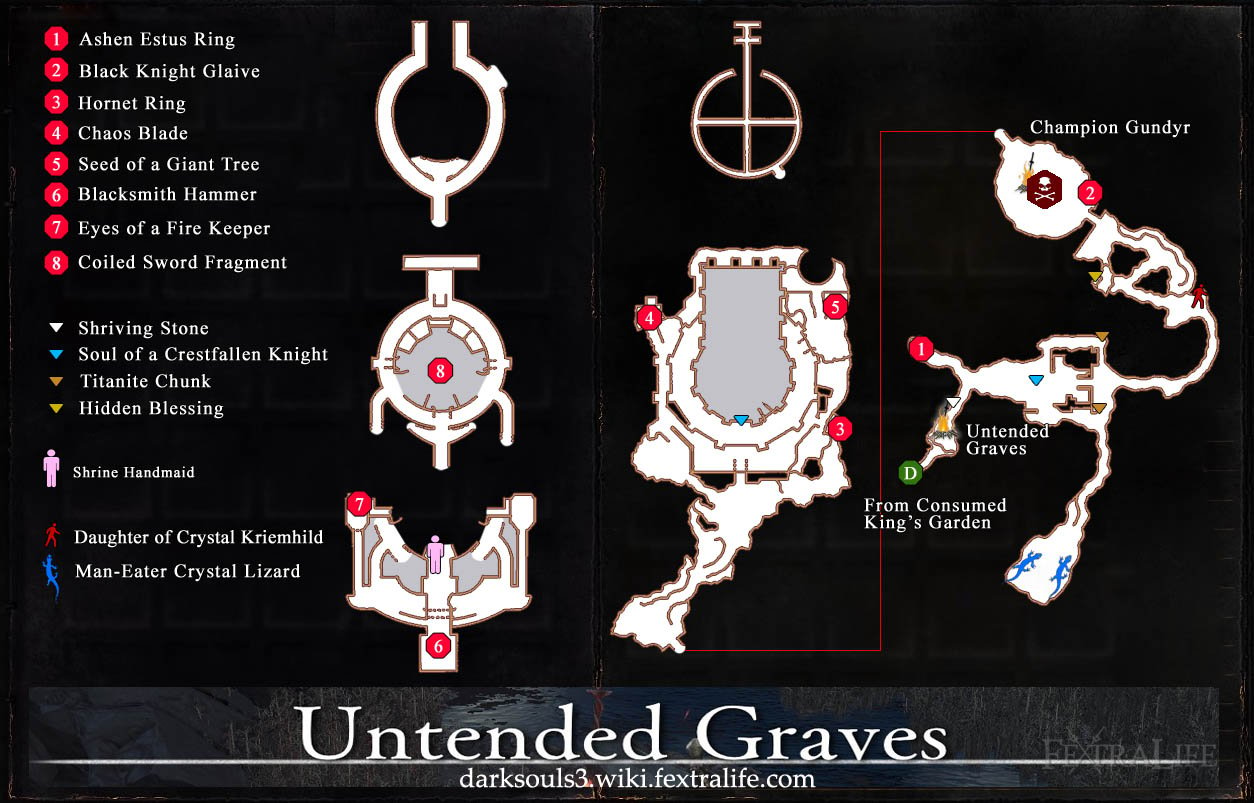 Starting from the Oceiros bonfire, follow the hallway until you find an item on the ground. pick it up, as it will allow you to access Archdragon Peak. Keep going and roll into the illusory wall immediatly behind the chest. follow the wall to the left to prevent fall damage, and then light the bonfire. Keep running, and if you need 4 titanite scales take a right where the ravenous crystal lizard was in Cemetary of Ash. keep going straight as if you were going to the Iudex fight. Enter the arena, and kill Champion Gundyr. Afterwards, open the door and head to where firelink shrine would be. In the bonfire pit, you will find the coiled sword fragment.