Profaned Capital is a Location in Dark Souls 3. The crumbling citadel is now home to deformed monstrosities and gargoyles, but the Lord of Cinder Yhorm still awaits at his throne for his long lost friend to come fulfill his promise. 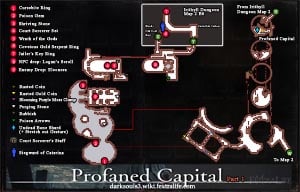 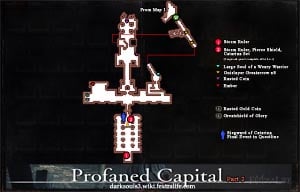 Click here to go to the speedrun section. At several points in this area's walkthrough you will cross in and out of Irithyll Dungeon.

Click here for Lore and Speculation on this location.

From Irithyll Dungeon, find the narrow stone bridge where you will enter the Profaned Capital and continue your journey towards the Lords of Cinder. On this bridge a Gargoyle will drop down to stop your progress. Defeat it and cross the bridge to come to a broken path. Take the ladder down and across the room take the ladder up to the planks where you will find the Stretch Out Gesture and Undead Bone Shard 1x and nearby a Bonfire. To challenge the boss early without exploring, see the Boss Fight heading below.

From the bonfire go back down the ladder to the lower floor and step out of the opening here and drop down. Head left to find a ladder on your left. Climb it to find Rusted Coin 2x. Head in this room and go to your left to exit and drop down to the ground and continue along the path. A Gargoyle will drop and attack here. Head right past him up the plank ramp and into the doorway.

Go straight and jump the hole in the floor to find a Crystal Lizard on the other side. Another lizard in the left tunnel. Continue down the hallway, and make a right. Step out onto the plank ledge and go right to find Blooming Purple Moss Clump 3x. Head back down the plank ledge and take it to the end and enter the door on the left. Straight ahead you will find Rusted Gold Coin 1x. To the left is a jump across a hole and a short set of stairs down. Straight down the hallway is a Crystal Lizard. If you drop down the hole it will land you in a Toxic pool with some of the insect like creatures encountered in the Irithyll of the Boreal Valley waters. If choosing to explore this area prep toxic clearing items like Blooming Purple Moss Clump. Items you can loot in this pool are Poison Gem 1x, Cursebite Ring, Purging Stone 1x.

Exit the pool up the sloping shore and climb the ladder and head to your left and continue onto the curved roof. Drop down to a lower ledge and drop down again to the pool, kill the insect like creatures to find a corpse in the corner with a Shriving Stone 1x. You can enter the building here to progress. Alternatively you can reach here via the pool but the other method will save some exposure to the toxicity.

Once in the building, head straight and open the ornate doors where 3 tough Monstrosities of Sin (hand beasts) lurk. These creatures have a lot of health and feature some powerful attacks so luring and tackling them one at a time is ideal. If they grab you in their mouths, they will also consume some of your souls. If you decide to engage them killing one will net you the Eleonora 1x. Melee users should note that these enemies are weak to bleed—which means they are weak to Kukri (bleed throwing knives) as well. Behind the hand beasts waits Purging Stone x2 against the far wall.

Leave the building and head back up the ladder. Head left down the path again onto the curved roof and head right into the building to find a single Monstrosity of Sin (hand beast). Behind some pots here you can find a corpse with the Court Sorcerer Set. If you head down the stairs out of this room you will find Rubbish on a corpse. Back up the stairs and to the right you will encounter a Mimic which will drop the Court Sorcerer's Staff.

Head back outside from where you first entered the building and head right and then right again to go up the stairs. Continue to the top of the stairs where you will encounter a hostile NPC to the right wielding the Gargoyle Flame Hammer. He will drop Logan's Scroll. Along the roof nearby you can loot a corpse for Poison Arrow 18x. From this roof you can jump across to a window and take the staircase up. You can use the Old Cell Key to open the door. In this room you will find the Covetous Gold Serpent Ring and if you've been progressing his quest line, Siegward of Catarina. If you decide to find his cell, retrace your steps back to the roof. Once back on the roof, head into the window next to drop down to a central platform where you will find the Miracle, Wrath of the Gods. Drop down to the floor and exit and head right and up the stairs again. Head left up the staircase to find 2 invisible jailers. To kill them attack the far wall, then and head left along the path to find the Jailer's Key Ring. If you drop down into the large area, you will land in a giant's room with rats that respawn. The giant can be downed similar to the others, sticking to its ankles and behind, keeping clear of its attacks. There is a tunnel you can use here to duck into to avoid its attacks. Once dead, you can loot the area for Profaned Flame, Large Titanite Shard 2x, Titanite Chunk 1x, Dung Pie 4x. Exit via the doorway to come to a lift. Take it to the top and open the gate, unlocking the shortcut from Irithyll Dungeon.

Return down the lift and exit the large area through the large opening and head right up the stairs. In the corner of this room is a doorway and a staircase leading up which takes you to a room with another Mimic. Kill it to retrieve Dragonslayer Lightning Arrow 10x. Take the ladder in this room up and exit the building to the plank ledge. Jump across the gap to loot Lightning Bolt 9x. Head into the opening here and head left down the stairs, or right towards a Jailer. If you go left you will cross through a room and outside where several Jailers wait right at the doorway. Dispatch or run past them and head up the stairs into the shortcut door you opened earlier.

Head down the hallway past the creature who lunges from your right and head to where the caged hollows were. Kill them if they've respawned and head right down the hallway they were protecting. In the next room head up the stairs and proceed forward. Make a left down the hallway and then make your immediate right across the bridge. At the end of the bridge head left and take an immediate right and descend the stairs into the room. Use the Jailer's Key Ring to open a gate to a cell, where you can find Prisoner Chief's Ashes. Exit the cell and head right and make a left into the next room and an immediate right to go back over the bridge. Go left down the hallway and drop down near the end and proceed through the opened grated door. Follow this to the right and take the lift down. Exit the left and head left past the petrified dragon person and take the winding stairs down to come to the room where several jailers lurked. Go straight to the second part of this room and head right to go through the hallway inside this room. There will be a jailer in this hallway. At the end of the hall, you can open the cell on the left with the Jailer's Key Ring and speak to Karla, freeing her. The boss fog to Yhorm can be accessed very early on, from the Profaned Capital bonfire. If at the bonfire, step just outside and take the ladder down and turn around to cross a crumbling bridge. You can drop down to the right for a small shortcut. If you stay on the bridge, a garygole will descend to attack you. Past him is a corpse with Onislayer Greatarrow 8x. Cross the bridge to the end and loot a corpse for Large Soul of a Weary Warrior 1x. Exit the doorway and take the stairs down into the next room where you will encounter 4 jailers wearing white as well as a fire casting gargoyle. Proceed forward and make a right to find more jailers around a large vessel holding a fire. Defeat them and head down the stairs. To the right, in front of a pillar you will find a corpse with Rusted Coin 1x. Continue to the end of this large walkway to find another corpse with Rusted Coin 1x.

Head back up the stairs and exit this chamber and make a right to head into another room with many jailers and a gargoyle who lurks up and to the right. There are two chests side by side in here, both are Mimics. Defeat them to obtain Greatshield of Glory and Rusted Gold Coin 2x. There is also a solitary legitimate chest here which can be looted for an Ember 1x. Leave the room and make a right to reach the fog, and beyond the boss Yhorm the Giant. Defeat him to earn Cinders of a Lord and Soul of Yhorm the Giant. 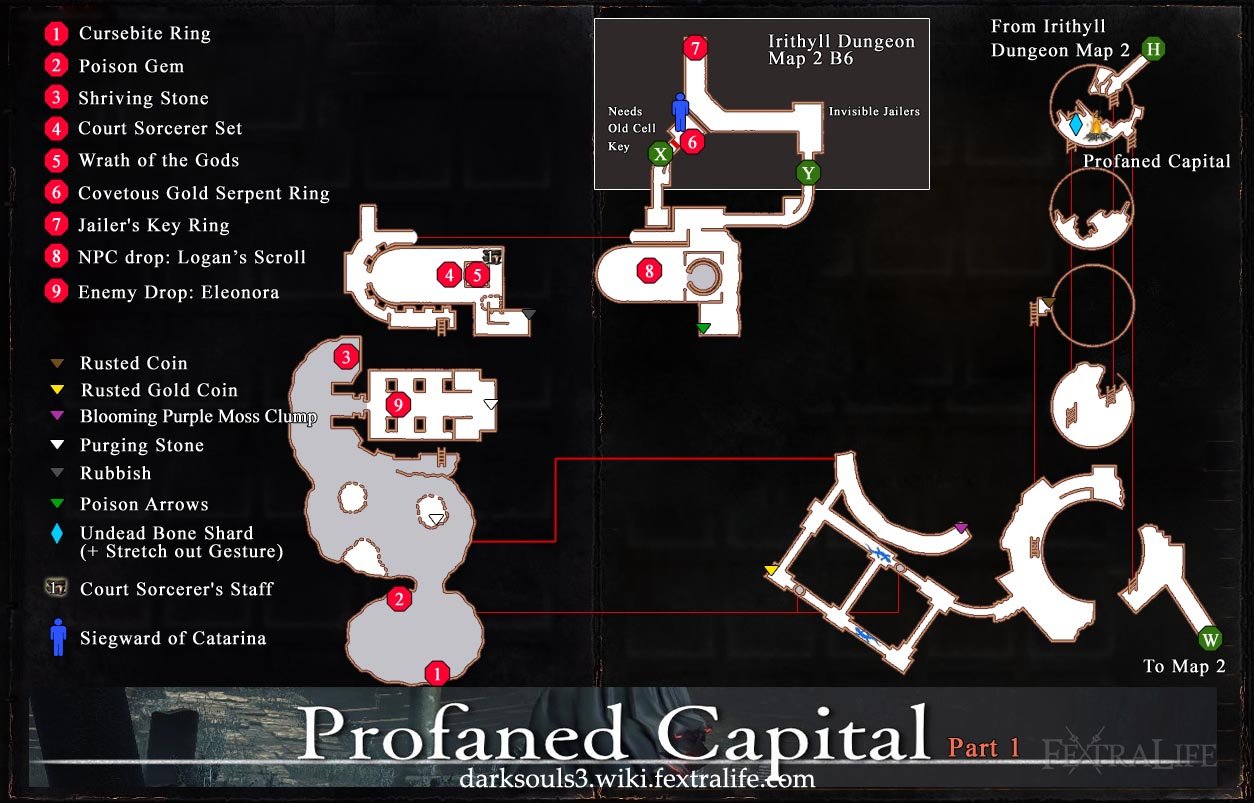 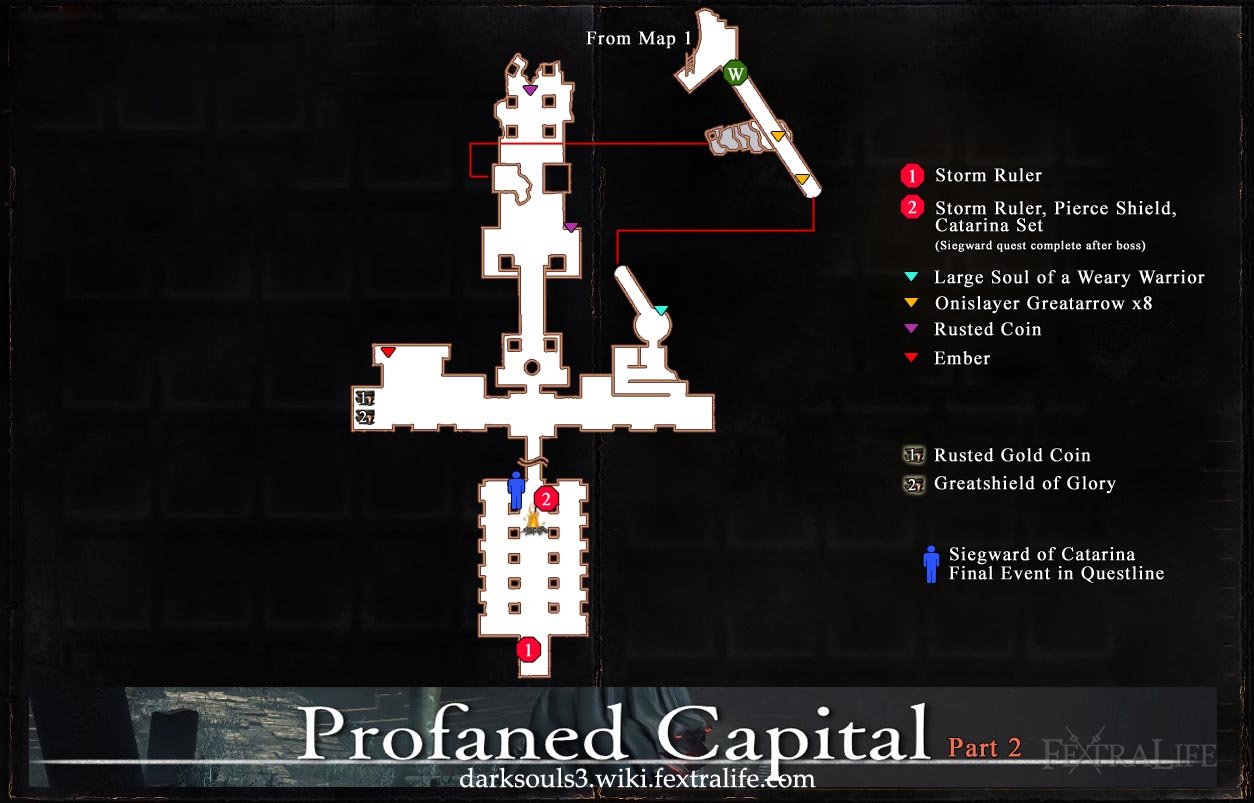 PS: This is just placeholder text.