Consumed King's Garden is a location in Dark Souls 3. This optional path takes the Ashen One towards Oceiros, who despairs in madness in the far halls. For those wanting to reach Archdragon's Peak, this is a necessary path. 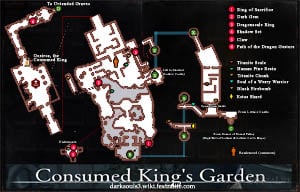 Head down the staircase (grab an Item to the right) to come to a  Cathedral Knight, similar to the ones in Cathedral of the Deep. Defeat it and enter the room to its right and take the lift down & roll out to a landing leading 1/2 way down. Exit the lift and head right down the stairs to find an Estus Shard 1x. If you head left, you can drop down to a narrow staircase with a Titanite Chunk 1x. The staircase leads down to a toxic mist area where a Pus of Man beast patrols. Like others encountered prior, it is weak to fire. Defeat it and explore the surrounding toxic area for a Claw, the Shadow Set, Black Firebomb 2x, Human Pine Resin 1x, Titanite Chunk 1x (up staircase), Ring of Sacrifice, Dark Gem 1x. There will be several slugs and Pus of Man beasts in this mist swamp so be cautious when exploring.

There is a doorway here you can take inside. It can be identified by moldy growth on the stairs leading up to it, and a dark beast lurking to its left. Head inside the doorway to find a lift. Take the lift to the top and exit to the outside. Proceed sraight through the doorway across the courtyard and enter. Straight ahead you will find a corpse against a wall with a Titanite Scale 1x. Head up the stairs in this room to encounter some thralls. Take the next staircase up to find a body with Titanite Chunk 1x. Open the door to the right of this corpse to unlock a shortcut to Lothric Castle.

From Shortcut to Hawkwood

Return to the lift and take it down. Around halfway down you will be able to roll off to a ledge where you can exit the tower to the outside. Take the stairs down to find a corpse with the Dragonscale Ring. Proceed forward to find an enemy hollow on your left. Down in the next area you will find two iron knights, who can safely be sniped with a bow from this ledge. One will drop the Magic Stoneplate Ring. Head up the stairs on the right and proceed ahead and down the stairs to come to the fog where you will take on the area boss, Oceiros, the Consumed King. If you head the other direction, you can find Hawkwood the Deserter's summon sign while in Ember Form, just up the stairs. He's a melee fighter that can tank Oceiros fairly well if you're a magic user.

Acquiring the Path of the Dragon Gesture

After defeating him, light the Bonfire. Step forward and open the double doors. Take the hallway down to encounter a wrapped enemy that can extend an appendage from their head. Enter the room and where you will find a vessel straight ahead and a corpse with Path of the Dragon Gesture on it. This gesture will gain you access to Archdragon Peak. Once you've defeated a summoned Drakeblood Knight in Archdragon Peak, you can find the Drakeblood Set where the gesture was. A chest on your left contains a Titanite Scale 1x.  Head into the upper section of this room to find a chest straight ahead. Loot it for a Titanite Scale 1x. Attack the wall behind the chest to reveal an Illusory Wall. Proceed ahead to light the bonfire and discover the Untended Graves. 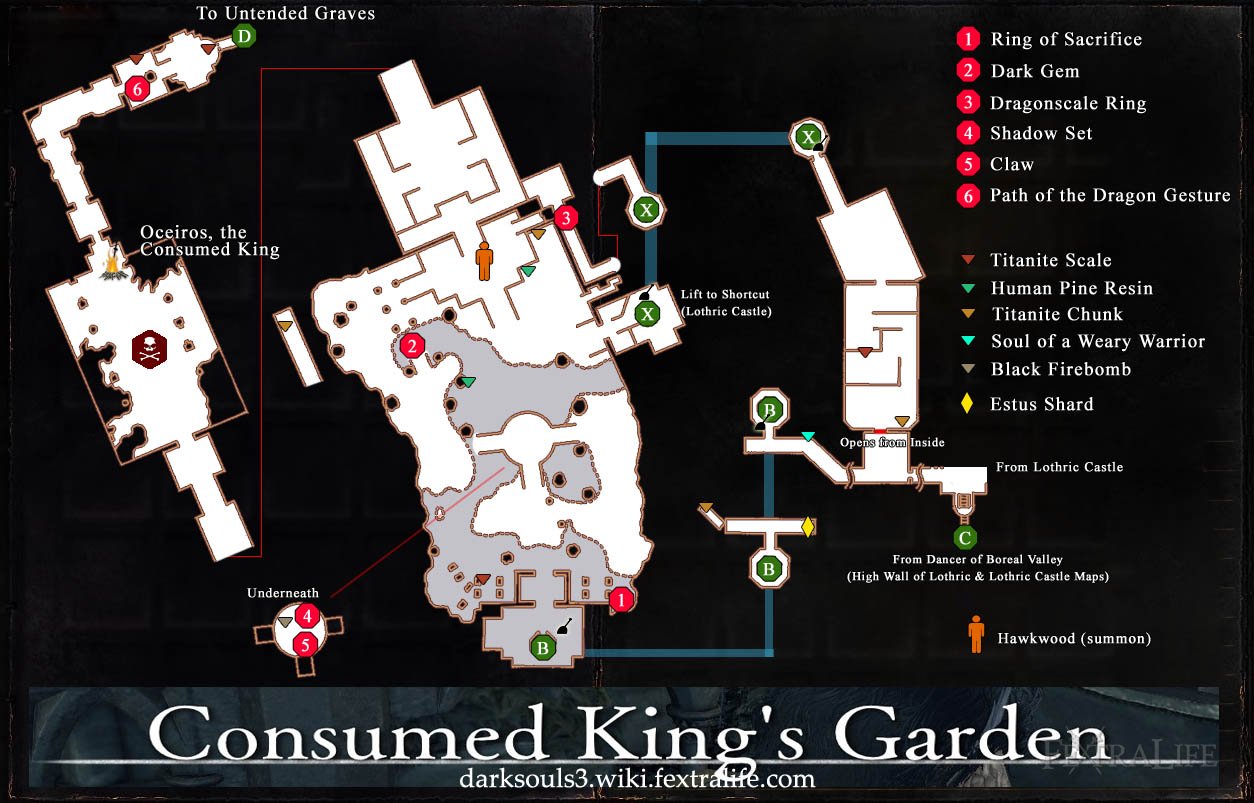