Lothric, Younger Prince is a Lord of Cinder and boss enemy in Dark Souls 3. He is a purely magical boss and is a force to be reckoned with while he's accompanied by his brother and partner boss Lorian, Elder Prince. While his magic makes for a challenging fight when synergized with his brother, he has only three attacks and is vulnerable alone.

Phase 1: This phase doesn't actually involve Lothric, but is still relevant due to it being part of the fight and a prerequisite in order to even fight Lothric. It's a pretty easy fight during the first phase as his attacks leave big windows. Move towards him, bait his combo which is most often a double horizontal slash and then roll backwards out of harms way, moving back in at the end of the combo to capitalize on the window. Be cautious because some of his combos, like the double horizontal slash, will sometimes be followed up with a vertical slash and there seems to be no way to tell which combo it will be aside from waiting and watching. Although a sure fire window is after the holy flame beam attack and after the flame wave attack, those never have immediate follow-ups so if you really want to play it safe only attack then, but often it will be pretty easy to attack him during other combos, just risky. Try to not get hit at all to conserve all estus the second phase.

Phase 2: First phase involving Lothric, he appears sitting on Lorian's back at the carpet near balcony (doesn't matter where was Lorian "killed"). Lothric will do 4 things. He will cast multiple tiny homing magic projectiles into the air which will float until locating you and then beam towards you. When that spell is cast, just roll through them. When you see them cast, distance yourself from Lorian to allow yourself to only focus on dodging that sorcery. Move in for attacks on Lorian during his windows after combos and while Lothric is inactive (he has a lot of down-time during the fight; he's not constantly casting). Be careful of one combo that Lothric and Lorian will often do. Almost right after Lorian performs his holy fire beam attack, Lothric will fire off a homing spear sorcery, so now just be sure to be ready to dodge right after Lorian slams his sword down. But when you do get Lorian's health all the way down, move in and barrage Lothric with attacks for only 2-3 seconds and then run away for he's casting a healing miracle which doubles as an AOE blast (Wrath of Gods?) on Lorian which will revive him with about half his health regained. The fight will just continue as normal and the next time Lorian goes down odds are Lothric is dead, very close so it will be the last time he goes down.

This boss is just plain harsh on pureblood casters.  If you get hit without a block, you will generally die.  Lots of patience and learning te patterns will be key here.  Phase 1 isn't too horrible, but is still not fun.  Lorian will teleport on top of you, requireing either a block or good dodge frequently.  Try to block the first shot (shield with physical and max fire resist), then dodge the following attack(s).  No fancy spells for this, it seems just Great Heavy Soul Arrow will be your bread and butter here.  If you can get far enough from Lorian down the hall, he will just crawl on his knees towards you, giveing time for 3-5 blasts before he teleports you and you have to reset him.

Phase 2:  If you thought phase 1 was bad, you're going to love this.  Lothric will climb on Lorian's back, and cast spells from there.  Hopefully you got good at dodging after the first block in phase 1, because failing to do so in phase 2 will almost guarentee death.  Lorian will have the same attacks, with Lothric casts versions of homing soulmass and  soul spear.  Lothric will not be constantly casting, however.  Try to get away from them like you did in phase 1 so Lorian has to crawl towards you.  Wait for lorian to cast, then get a few casts in yourself.  When you dps Lorian down, Lothric will get off and res him.  You want to shoot him as much as possible, which sucks, because he takes about half the magic damage that his brother does.  If you can ready a crystal-enchanted weapon it would probably be a much better option against lorian.  However, time window constraints from how very little Lorian is available to be hit makes this strategy unlikely.

This boss can be somewhat tricky for pyromancers. The first phase won't give you much trouble. Powerful fire spells such as Chaos Bed  Vestiges or Great Chaos Fire Orb do considerable damage to Lorian. Simply be prepared to dodge his attacks when he teleports, and evade the smash. If you keep your distance, Lorian will often simply crawl at you, giving you time to free cast spells.

During Phase II, things will get somewhat harder. Lorian will become more aggressive, and Lothric will cast spells at you, making getting casts off risky. Hitting Lothric while Lorian is still alive is very difficult, since the cast times of most pyromancies are so long that any window of opportunity you get will close before you get the cast off. Killing Lorian again and taking the chance to deal damage to Lothric during this time works fine, and two Lorian kills during Phase II should be enough to kill Lothric.

Lorian is weak to frostbite. The Irithyll Rapier causes frost damage and it is a fast dps weapon. The Irithyll Straightsword is also a viable option. Combine that with Pontiff's Right Eye ring (dmg boost as long as attacking persists) and Carthus Beacon pyromancy (Damage increases with consecutive attacks) and you will have very fast damage dealing potential. That is, if you can dodge boss' attacks and stay aggressive.

Try to stay near and behind the boss at all times. Butt hugging makes him circling around too instead of spamming attacks so it gives more openings, helps to avoid taking damage and makes stamina control little easier. Some of the boss' swings even miss you without dodging, if you stay close to him. It takes a lot of practice to get used to him teleporting around. Rule of thumb for first timers is that if he teleports near you, dodge soon or immediately, but if he teleports little further away from you, wait and do not dodge immediately. With training you will learn his moveset and begin to predict what move is coming.

This strategy is fairly simple. Use a Black Knight Shield and circle strafe around Lorian to the right. After he swings, hit him a single time and continue circling. The Black Knight Shield's high fire absorption and stability will make his attacks almost meaningless and a few will probably miss altogether. The only threats using this strategy are the magic attacks from Lothric and the Light Beam attack Lorian sometimes does after teleporting.

Locking on Lorian while using bow and keeping will give you great opportunity to free cheesy attacks. You should only worry about teleporting or using his long-ranged magic attack (by hitting sword to the ground).

Phase 2 can be cheesed by killing him while standing right in the spot when Lorian will spawn after "death"in phase 1. Your location has to be exactly behind this spot - walking, touching stairs or being too far away from "center line" of the carpet will aggro them. If you place yourself correctly, Twin Princes will just stay in place, giving you free opportunity to shoot Lothric in the back using bow. You can also use Pestilent Mercury, but it will kill Lorian first (or you), so not really useful as a main "weapon".

Please notice that if NPC phantom is killed right before starting this cheese phase 2 his or her death animation would still last in phase 2, aggroing the Princes. 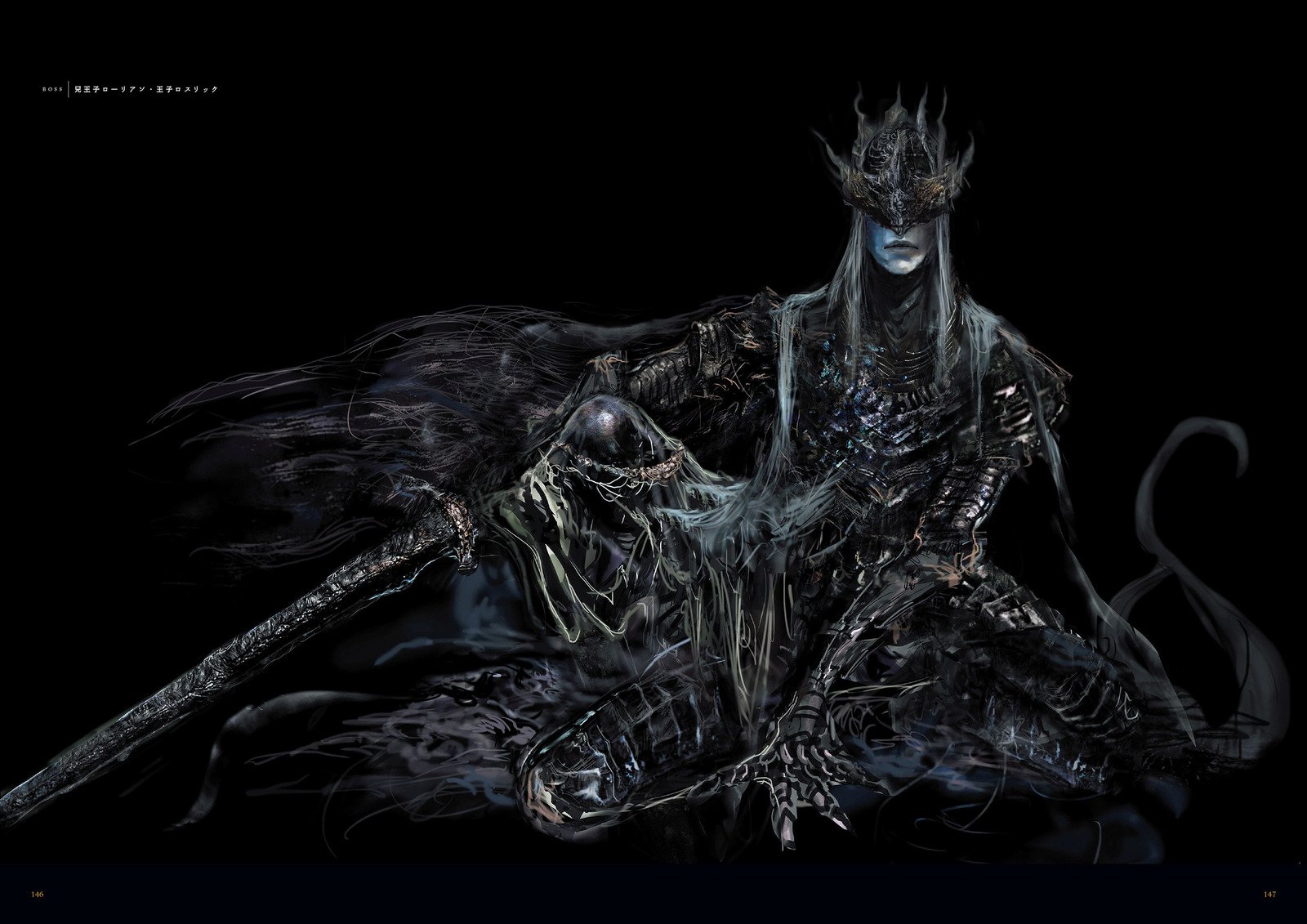 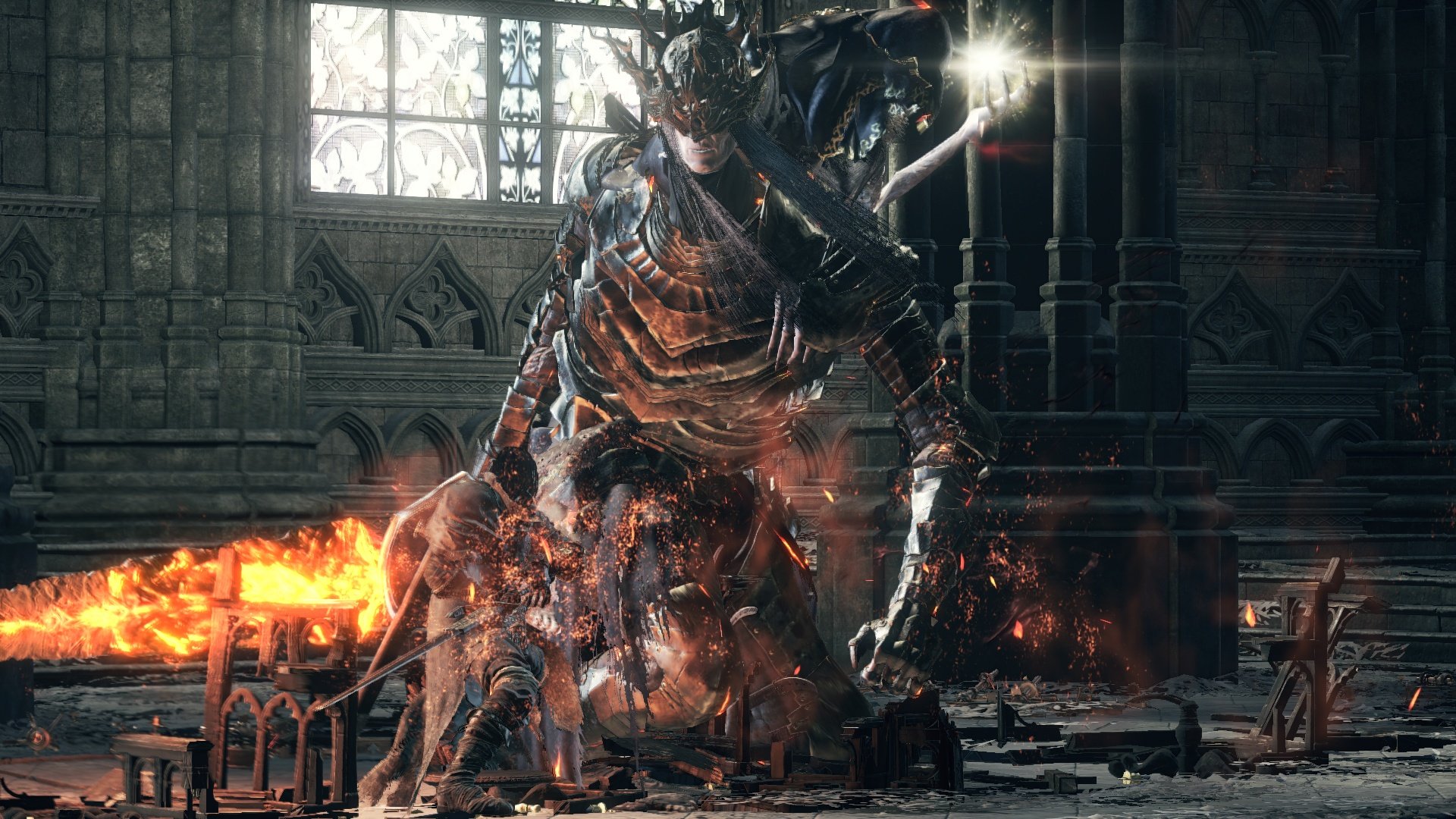 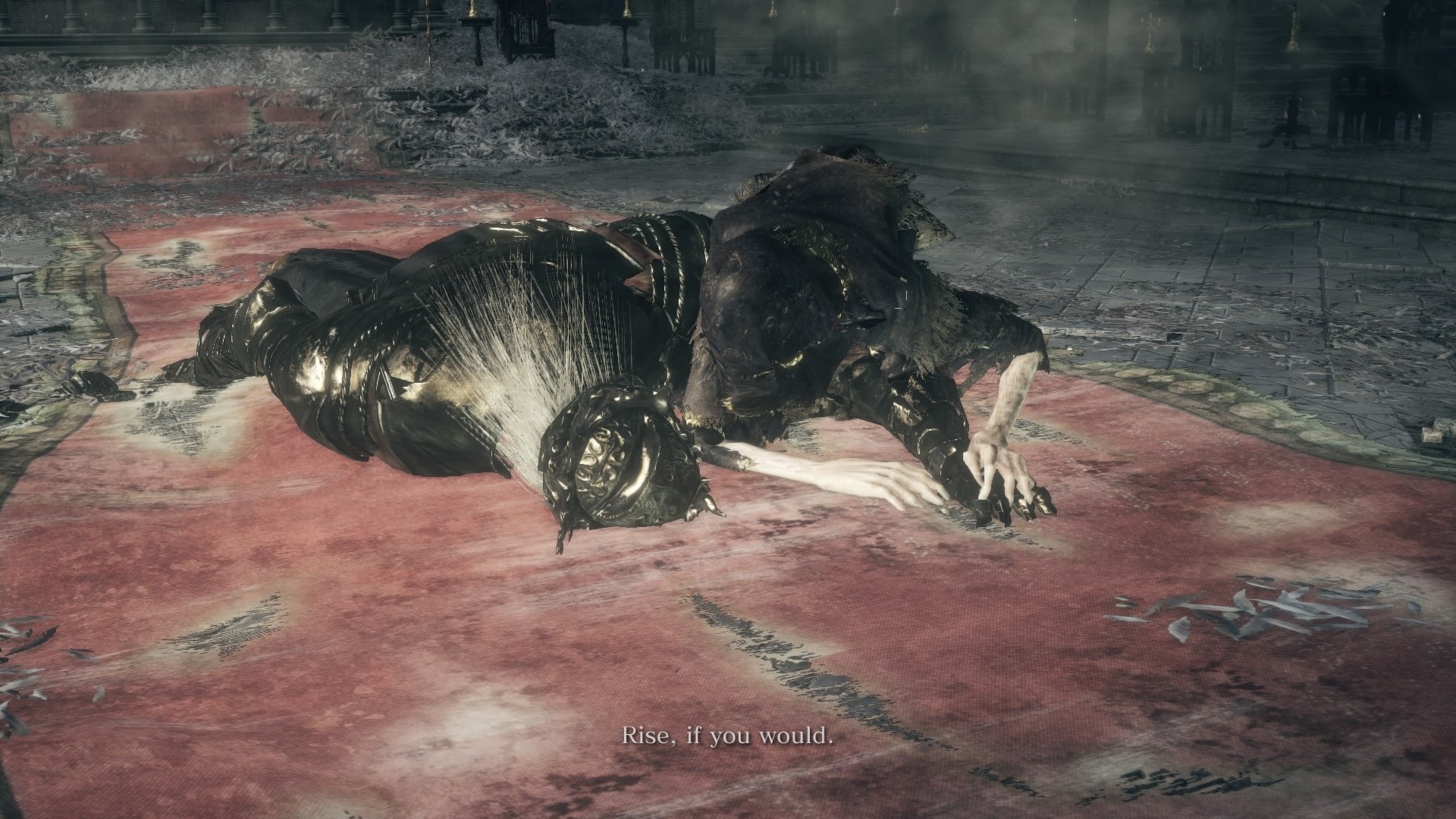 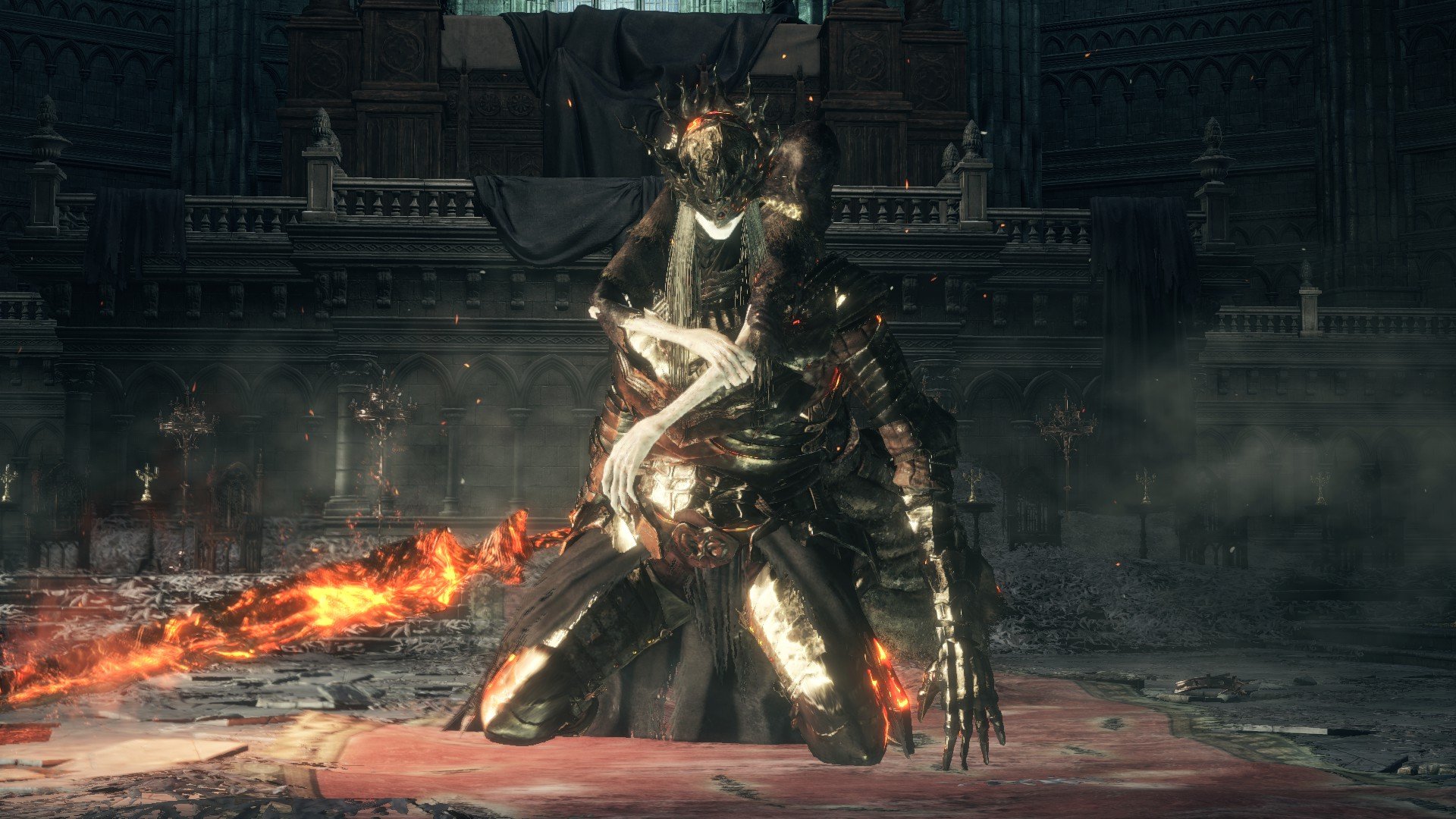