Sister Friede is a Boss enemy in Dark Souls 3. She is part of the Ashes of Ariandel DLC.

Before advancing to take her on, summon the NPC by the bonfire.

In the first phase of the fight, Sister Friede will shoot streaks of frost that deal heavy frost damage, and can quickly inflict Frostbite. She will often become invisible and teleport directly over your head, finishing with a lethal move. You can counter this by watching for a puff of fog where she lands behind you or listening for her footsteps. You can walk up and interrupt her invisibility spell. Her attacks can be easily interrupted and she is also vulnerable to backstabbing. When this phase is complete, the next two are incredibly difficult.

A cutscene will indicate the start of the second phase, at which point Ariandel joins the fight. The NPC you summoned prior to the fight will appear at this point and will assist you. Let your companion occupy Friede while you shift your attention to Ariandel. You can hit him from behind, but be wary of his powerful attacks. Eventually he will become staggered and open for a critical attack. During this phase both bosses share the same health bar, but attacking Father Ariandel makes the health bar deplete much more quickly.

In this final phase of the fight, Sister Friede will become Blackflame Friede will begin to deal dark damage in addition to her frost and melee abilities now augmented with increased speed.  Be wary of standing next to her as she comes back to life. She will begin to mix in a dark beam as well as a charged dark explosion that both deal a tremendous amount of damage. She will occasionally also take to the air and attempt a devastating attack from above. To defeat her keep your melee distance and dodge her magical attacks to the left and right, dodge far to the left to avoid her dark charged explosion. When she slows down take advantage of the window to get some attacks in and then retreat. Repeat this process of evasion and attack until she is defeated.

In conjunction with everything else that applies to melee players, below is a playbook of tips on how to beat Sister Friede and Father Ariandel (provided the player's weapon is a faster swinger, like a Broadsword, or better):

However, the demands scale up really high when one goes into NG+7, so I will add some new caveats for each phase

That is all! The player should now know how to avoid damage from Friede and Ariandel, while dealing it out, for that easy but still skillful win.

For Stage 1: Try to be aggressive when she teleports so you can cancel her attack as it's very powerful and can almost one shot the player.


For Stage 2: Leave Friede alone and go after Ariandel. Attack him from the back or the sides while being wary of his attacks and AOE smash. Roll through Friede's ice attacks. Ariandel may or may not be ripostable but he should go down fairly quickly.

For Stage 3: Play more passive while you understand Friede's attacks. Most have a wide or long AOE and do massive damage. There is a slight delay between the scythe swings, giving you a chance to attack and break her poise.

Before fight: Find, equip and upgrade Warden Twinblades (or any weapon, that by default can cause Blood Loss and can be buffed) and buy at least 20 Carthus Rouge (in case you fail to beat the boss on first run - average run with final phase requires up to 4-5 Carthus Rouges). While choosing the rest of your set (shield is not necessary) try to increase fire and frost resistance as much as possible, but do not forget about agility and physical defense. Just before the fight use Carthus Rouge and reapply during break in fight or at beginning of phase.

1st phase: You will face only Sister Friede, an easily staggered boss on whom critical attacks can be deadly. During her invisibility run across the room and after the sound jump in opposite direction of her attack (hard, but possible to avoid). Attack after her attacks - every three to four hits you will trigger the bleed damage, on NG+3 this was around 1000 damage.

2nd phase: Instead of fighting Friede focus on Ariandel because he seems to be more vulnerable to bleed than Friede, but keep in mind that the combination of Friede's frost attack and Ariandel's bowl stomp is usually deadly. The most suitable moment for attacking is after Ariandel's rush.  Dodge and then simply run to him and strike multiple times (On NG+3 his rush can easily deal 4500 damage). When Friede uses her healing spell you don't have to interrupt her, as simply attacking Ariandel will negate the spell effect (as well as lowering the total amount of HP). Just keep in mind to avoid Ariandel's attacks, because no matter what armor you use they will probably deliver a lot of damage, if not a fatal blow.

3rd phase: DON'T RUSH TOWARDS HER during her transformation (her HP will replenish and you will take some fire damage). Use that moment to heal or use Carthus Rouge. In this phase she is WAY more dangerous than in the first or second phase. The best opportunity to attack her is after the massive dark flame AoE attack that uses some kind of upgraded Dark Serpent. A few successful hits will deal massive bleed damage.

Equipment: Court Sorcerer's Staff +10, Magic Clutch Ring, Bellowing and Young Dragoncrest Ring, Sage Ring (+1/+2). Scholar's Candlestick in offhand for sorcery boost. A fast weapon like a straightsword is also helpful for flushing her out when she turns invisible.

With this loadout and 99 INT, I was doing around 600 per hit with GHSA. This spell is your bread and butter for this fight since there is so much HP to burn through, and it also staggers her reliably.

First phase: Just try to keep your distance constantly as she attacks, avoiding corners and the ends of the room. I like to save up stamina to full or almost full before firing off a volley of spells, as opposed to hammering R1 when you have minimal stamina. When she turns invisible, jog up and down the length of the room, reversing course occasionally to confound her aim. Or, if you happened to see the direction she went, (sometimes you can catch a glimpse of her as she flies past) run after her and hit her with your weapon to stagger her out of the assassination attack.

Second phase: Other than her exploding ice patches, you can ignore Friede almost entirely as long as you stay away from her. Focus fire on Ariandel from a distance, which will probably cause him to use his bowl slam to drag himself toward you. The thing about this attack is he can't easily turn once he commits to a direction. Right after he slams his bowl into the ground near you, roll/run behind him, and you should get a ton of free hits as he careens past. This phase should be a gimme as you can burn down Ariandel quickly with sorcery.

Third phase: During her resurrection animation, Friede will prop her scythe on the ground to pull herself to her feet. Don't stand too close, but right at this moment, you should be able to lock on to her and get 2 or 3 free shots before she starts attacking. This phase comes down to staying away from Friede while effectively dodging her ranged attacks. Her black flame tornado followed by shooting a flame snake got me a few times, but you can avoid it just by locking onto her and strafing sideways. When she goes invisible, avoid her exploding ice patches and wait for her to reappear, watching out for her black flame snake. You can sometimes interrupt her combos with sorcery, but I found it to be more reliable to hit her at the end of her combos, as she sometimes punishes your casting by firing a black flame snake that will hit you during your spell animation. Just back/roll away from her constantly while waiting for an opening.

Pyromancer using this spell with 32 Intelligence and 32 Faith will deal high damage with Chaos Bed Vestige - around 700 in case of Friede and even 1,000 or more to Ariandel.  Mail Breaker is a must to break dangerous Friede attacks or backstab her (backstab may deal up to 700 damage).

1st phase: Try to limit attacks to moments, where Friede is preparing to strike - otherwise, you risk, that Friede will evade spell or receive minor damage. If you play carefully, Friede will be downed pretty fast.

2nd phase: Don't focus on Friede (but watch for her attacks with AoE, or when she starts to heal), but attack Ariandel and - when he has a cooldown or stationary attacks like Fire Breath (of course, if you are not risked of getting hit) spam him with CBV, as he is very weak to fire. In case Friede starts to heal hit her with CBV to break down the spell or backstab her.

3rd phase: Watch out for attacks, and attack during cooldowns or to break some of her actions. Mail Breaker is useful to backstab or stun her.

Second Phase (3rd battle phase) - In this phase Friede uses Dark Pyromancy and is labeled as Darkflame Friede. She uses a few attacks from her first phase, but they are now more powerful.

(Ariandel): I see flame. Flame, flickering, once again. Not enough blood yet shed. My flail.... Bring me my flail. Ahh, Friede. What stops thine ears? Please, my flail, right away...

Cutscene dialogue, before fight (needs to be triggered by approaching Ariandel and choosing option "Talk")

(Ariandel): Ahh, oh. Bring Friede to me, please. Canst thou not see? The flame, flickering once again. Soon it will surge. I can see it, feel it...

(Friede appears, this time as boss)

(Friede): Fret no father, we have no need of thy flail. Tis only the flame, quivering at misguided Ash. Please avert thine eyes. I will snuff out these ashes for good.

(Ariandel): When the Ashes are two, a flame alighteth. Thou'rt Ash,  and fire befits thee, of course...

Player is not a Lord of Londor

(Friede): Return from whence thou cam'st
For that is thy place of belonging.

(Friede): Leave us be, Ashen One.
Sweep all thought of us from thy mind. As thy kind always have.

Player is a Lord of Londor

(Friede): Leave us be, Ashen One.
Thou art the Lord of Londor and have thine own subjects to guide.

Player completed Lord of Hollow ending, but not started next NG Cycle

(Friede): Return Lord of Londor. You have your own subjects to attain to.

The eldest of three sisters: Friede, Yuria and Liliane are founders of the Sable Church of Londor. 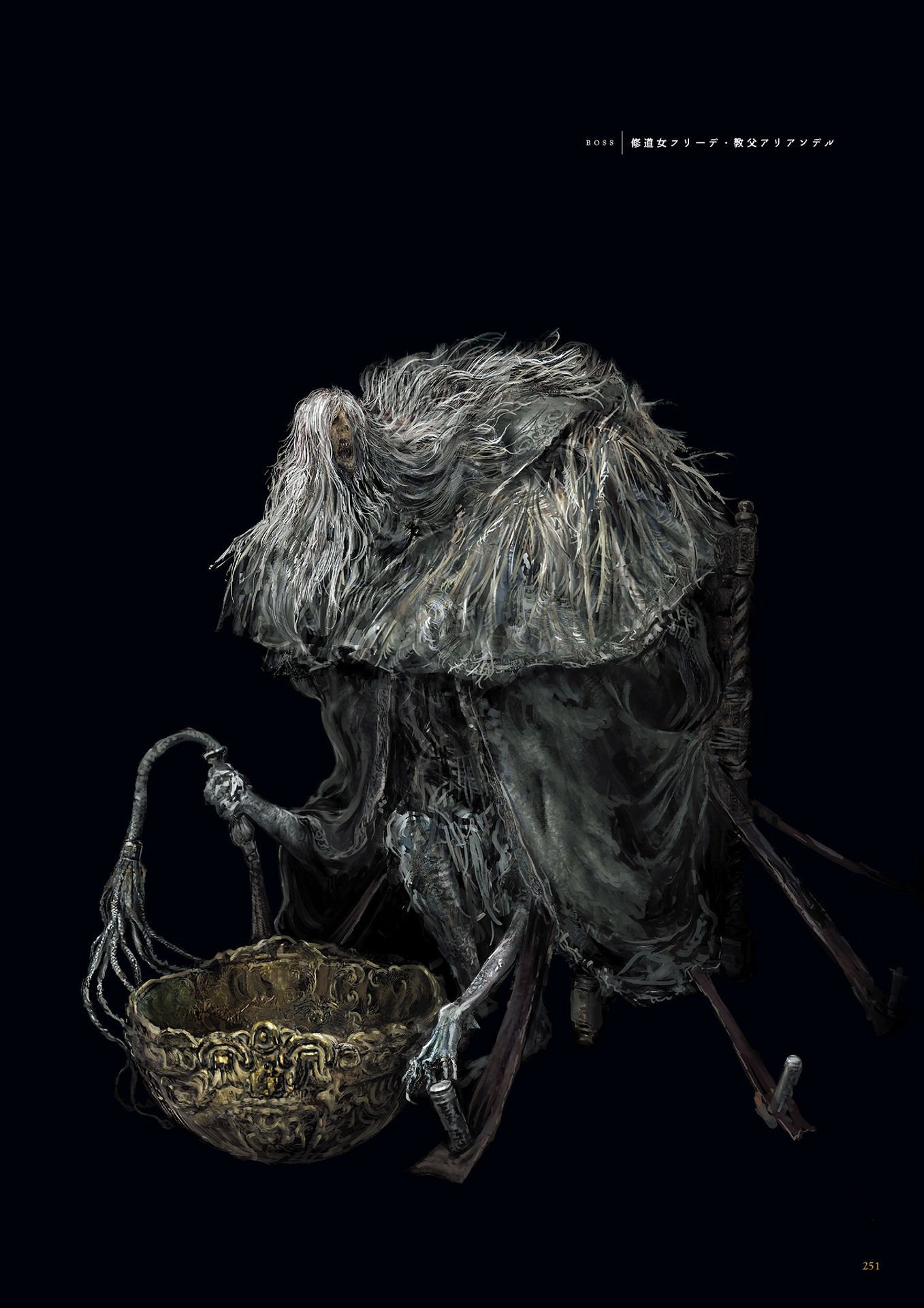 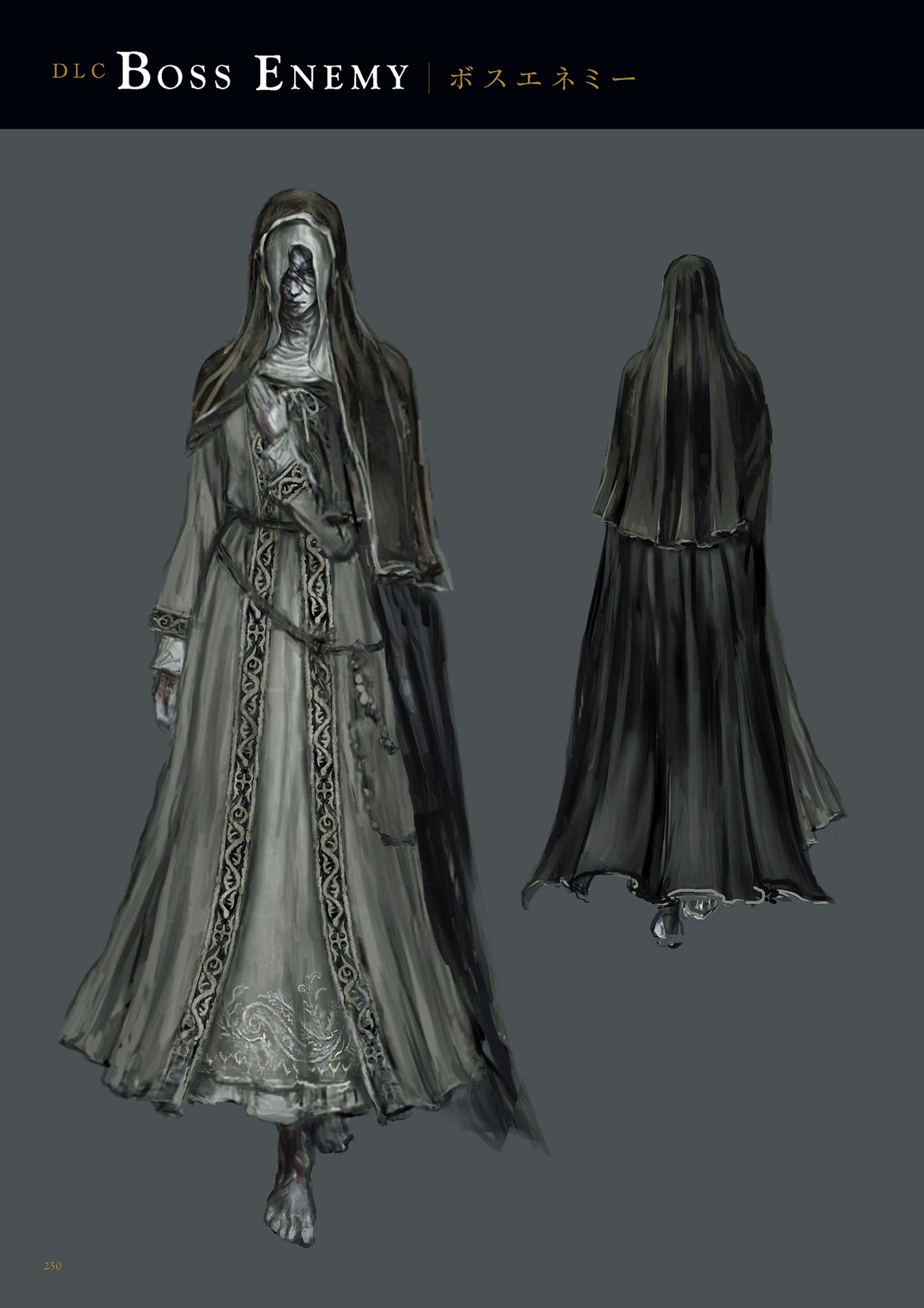